Who Else Besides Mr. Ratburn Is Queer On ‘Arthur’?

The countdown to BYT’s annual Pride party (get your tickets now) has officially begun! We can’t wait to get down with you all on May 31st (JUST ELEVEN DAYS AWAY) in the most beautiful courtyard in D.C. We’ll be in great company with Aquaria, who you might know from the Met Gala and Drag Race and every social media platform of all time, plus the music’s gonna be killer, lewks galore for the NYE theme, and DID WE MENTION THE OPEN BAR?! It’s gonna be the ultimate Pride celebration, and we. are. BUZZIN’.

SPEAKING of celebrations…last week, PBS Kids program Arthur made headlines after Mr. Ratburn, Arthur’s teacher, married his partner (another man) to kick off the show’s twenty-second season. Some viewers were shocked (even outraged) at the display, but there was also an overwhelming amount of support for the nod to LGBTQ+ representation. I was/am obviously VERY here for it, and I was especially impressed with the way the writers treated the marriage – there was no fanfare made about the fact it was a gay wedding, it was just a wedding.

All of this got me thinking about Elwood City Pride, though, and what that might look like, because there were plenty of characters with queer potential. Here are the ones who specifically give me those vibes:

I mean, come on. If anyone is gonna turn out to be queer here, it’s absolutely Francine. (And I know I’m not the first person to point it out.) Sports? Check. Tomboy fashion? Check. Femme best friend who is potentially going to drum up confusing feelings sometime around middle school? Check. Consider my bets placed.

Y’all remember Prunella’s older sister? She’s into all things spiritual and paranormal, and while I’m not saying you can’t be into astrological charts ‘n tea leaves if you’re straight, I would say (as would Tinder) her mystical interests skew hella queer.

Molly (of Tough Customers acclaim) is, like Francine, kind of a no brainer here. Major diesel dyke energy here, and I am ABOUT IT.

They’re already well on their way to mastering handkerchief code culture, but also I just want them to be the male version of Tegan and Sara. Elmwood City needs some homegrown musical talent of the gay twin variety.

Sally babysat for Arthur in S6, and he developed a big ol’ lesbian crush on her. I say lesbian crush because I got mega queer vibes from homegirl. (In the show it turns out she has a boyfriend, but as a bisexual sixteen-year-old, so did I.) Like, look at her style choices, her hair, her gaming skills…FLUID, Y’ALL. 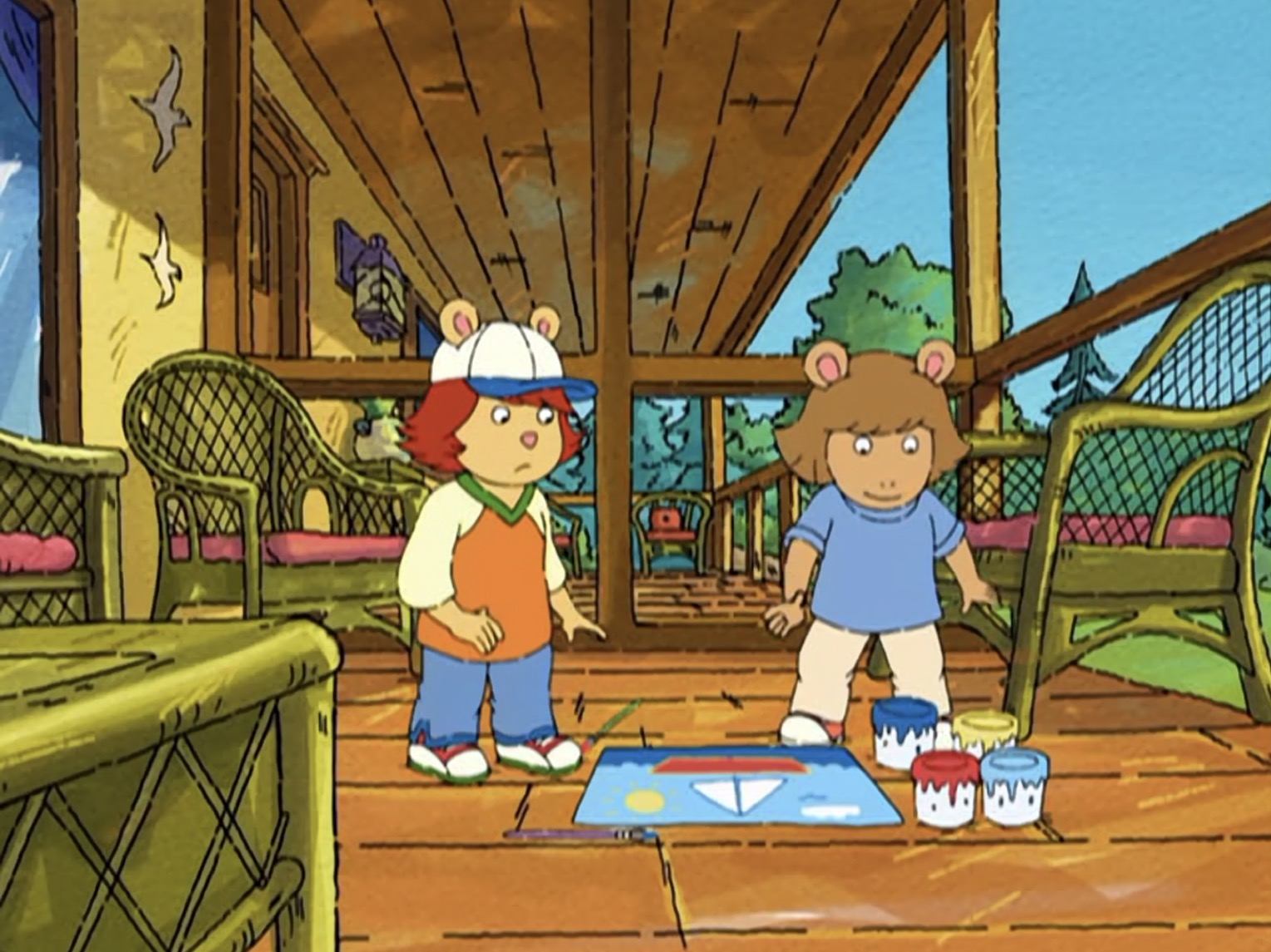 While the jury is still out on DW (though I could definitely see her bein’ a boss ass queer), I have relatively few doubts that her arch nemesis, WD Merkles, is hundo-percent on the train to LGBTown. And she’s already getting the hang of saying “I AIN’T UR UNICORN!” – when DW states that she’s not interested in the tomboyish things WD’s into, WD goes, “Yeah, and I’m not interested in unicorns!” SAME, GIRL. (She is also v. averse to rainbows, so there is probably some level of internalized homophobia at play, but there is plenty of time for her to see the LGBTQ+ light.)

Who am I missing? Do you think I am way off? PLEASE LET ME KNOW! Also, see you real soon at Pride!!!

After a 6 month delay, the Maryland Institute College of Art MFA in Studio Art 2020 graduates are thrilled to be exhibiting their thesis work at VisArts in Rockville. The

After a 6 month delay, the Maryland Institute College of Art MFA in Studio Art 2020 graduates are thrilled to be exhibiting their thesis work at VisArts in Rockville. The exhibition of 8 artists from across the country will span the Gibbs, Kaplan, and Common Ground galleries of the VisArts space.

The exhibition is open by appointment (groups of no more than 5 at a time) April–May 14, 2021. To make a reservation online, visit the VisArts website (https://www.visartscenter.org/) or https://bit.ly/visarts-appt

The event will include comedy performances by Simone, Reese Waters, Dana Fleitman and Natalie McGill.  There will be a raffle during the event.  Raffle items will be updated

The event will include comedy performances by Simone, Reese Waters, Dana Fleitman and Natalie McGill.  There will be a raffle during the event.  Raffle items will be updated on this campaign page closer to the comedy event date on May 19th.

A $20 Donation will get you admitted into the comedy event plus 2 Raffle Items.

To RSVP for the event, make a $20 donation on the campaign page to be admitted to the event.

You can make the following donations to purchase additional raffle tickets below:

All proceeds from this event  are 100% tax deductible and will benefit Roxana’s 2021 Leukemia & Lymphoma Society (LLS) All-Star Campaign towards sponsoring an Immunotherapy Cancer Research Grant.