“It’s the perfect space in some ways and kind of an awkward space in another,” John Jacob explains as we walk through the bright and airy halls of the Smithsonian American Art Museum. Jacob, who celebrates his third anniversary as the McEvoy Family Curator for Photography this month, is giving me a tour of his largest exhibition to date. Succinctly titled “Trevor Paglen: Sites Unseen”, the exhibition is a mid-career survey that takes up almost the entirety of SAAM’s third floor (P.S. come party in that exhibit with us this Friday!). On one hand, that gives you a good idea of the breathtaking scope of the exhibition, but for a head curator like Jacob, it also means that directing the flow of traffic and telling a chronological story is quite the feat.

“It’s awkward because we have essentially three entrances, but this is my favorite entrance,” he says as we briskly zoom past the tourists and small children and right up to a giant mirrored sphere hanging from the ceiling. The sculpture (or “object” as it’s called in the exhibition) is head turning. Dangling from the high ceiling, it looks like the modern interpretation of a celestial body. While it doesn’t mark the beginning of Paglen’s research heavy brand of photography and sculptural work, it’s an exemplary model of his art. Non-succinctly titled “Prototype for a Nonfunctional Satellite” the sphere is one of the many satellite prototype’s Paglen created, the entire goal being to shoot a non-intelligence gathering satellite into space for the hell of it. There are no computers in it, no GPS, nothing that would tell us anything about the cosmos. “The whole idea is that it’s a piece of engineering done for engineering’s sake, the same way we make art for art’s sake,” Jacob explains. “If it’s launched into space, it’s merely a beautiful object to gaze upon.”

And Paglen will seriously be launching one of his satellites into space. When it comes to the crossroads of art, technology and humanity, Paglen doesn’t play. He’s traversed mountains, learned how to scuba dive and has spent countless hours researching covert military operations just to give us a glimpse at the things we’re not supposed to see… and then he turns around and subverts them. Which is why after spending years taking photos of satellites, Paglen took everything he knew about them and created his own. There are countless examples of Paglen’s dark humor throughout the exhibition. He plays with AI’s, makes art out of code names and creates photographs of classified sites that look like abstract wonders. His sculptures and photography are deeply intertwined, but the secret sauce is his ephemera. The maps, military patches, letters and other research debris tie the exhibition together, giving you a glimpse at the work that goes into Paglen’s projects. From Freedom Of Information Act requests to in depth interviews, the man is a hoarder of knowledge.

And it’s these extras that really capture Jacob’s attention. “I’m really drawn to everything that surrounds the making of an artwork,” he says, “I’ve spent 15 years before coming here working with artists estates and helping photographers plan their legacies and building projects from their archives after they died.” Jacob’s dedication to the ephemera shows. One room has a wall entirely dedicated to military patches. In one long row behind glass, the patches are filled with grim reapers, dragons, eagles and American flags. A mixture of the sort of iconography you’d see on Party City 4th of July decorations and Hell’s Angel’s memorabilia. In other rooms, there is a tablet that scrolls through 4,000 different code names and blown up versions of challenge coins decorate the walls. A less flashy, but spooky collection shows off a series of letters approving rendition flights, all of which are signed by a Terry Hogan. All of which have wildly different signatures. 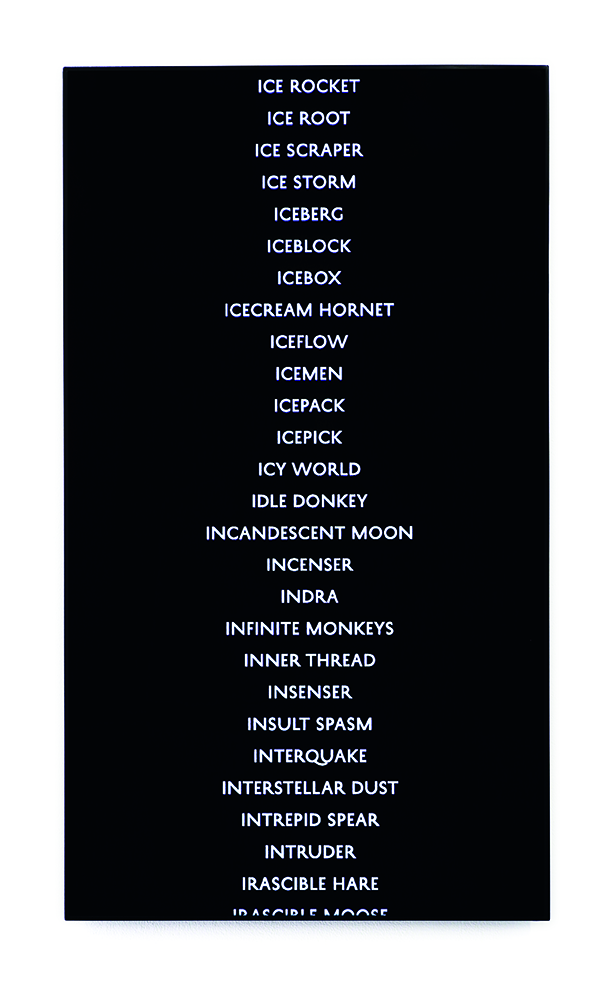 At points, it feels shocking that all of Paglen’s work is legal. “When he makes these photographs, he does the research, so he knows what he’s talking about and he’s also standing at a place where making these photographs is perfectly legal,” Jacobs says, adding, “That’s important to him.” For his earlier, landscape based photography, Paglen used geographers tools to climb mountains, so he could get a good vantage point to shoot these classified sites. He also adapted astrophotography lenses to his camera so he could shoot objects from one mile to 40 miles away. “As a geographer, he knows that any physical object, something in the world reflects light and occupies space, therefore, it can be photographed,” says Jacob as he points out blurry, yet captivating photos of grey buildings in the middle of the desert. The further away Paglen stands from these sites, the more abstract his images become. Jacob explains that, over long distances the rules of photography change. Color doesn’t move the same way through heat, so images shot 40 miles across a desert tend to break down and become dreamily abstract. In fact some of Paglen’s pastel hued photos could easily be compared to Rothkos.

Down the hallway, across from the beautiful “Nonfunctional Satellite” is another one of Paglen’s objects. In aesthetics, it is the opposite of the striking sphere, but it serves a very similar function. Called the “Autonomy Cube” it looks like a torn down computer, but it has a highly important function, it is a working wifi hotspot that routes all traffic through the Tor network. “If you can think of the satellite as asking what aerospace engineering looks like without any intelligence gathering function, you think about this piece as what does the Internet look like without any intelligence gathering function,” Jacob explains. While Tor has been rebranded as the software loved by terrorists and other criminals, Paglen is suggesting that surveillance free browsing become a cornerstone of public institutions like museums and libraries. “The reason this sculpture is at the center of the exhibition is that it’s important for institutions like this one to embrace these protections of our freedoms,” says Jacob.

At the very end of the exhibition (or the beginning, depending on how you walk in), you’ll find Jacob’s favorite piece. It’s a brightly colored gradient-esque image featuring bright blues and greens, a smattering of dark purple and a bright yellow splash right in the middle. It’s what an AI thinks and goldfish looks like. Basically, after teaching an AI how to identify photos of a goldfish, Paglen did a little bit of reverse engineering and programmed the AI to show him what a goldfish looked like through its metallic, robot eyes. Because AI’s don’t see the way we see, there are no edges in the photo. It’s just an abstract yellow-orange circle surrounded by blue and green. It’s the barely anything, nonetheless a goldfish, but it looks beautiful. “It embodies Trevor,” Jacob says. “He’s showing us something difficult and he’s perhaps warning us, but he also shows us that it’s capable of extraordinary beauty… Is this beautiful to the machine? No, not at all. The fact that it is to us is kind of profound.”