Look, it’s simple: Every week we’ll be bringing you all the information you can handle about the cool concerts to hit up in D.C. Don’t say we don’t love you. (p.s. BANDS/VENUES-looking to get your shows in front of us? Just head over to our AGENDA page, it is super easy to post your events there and it guarantees us seeing them).

When we sat down to talk to Robert Levon Been of Black Rebel Motorcycle Club back in 2010, he told us that rock music might have a death instinct. “It feels right now, just in the last couple years, that rock and roll music is trying to be pushed out of the game.” Tonight’s show will be a testament to either the truth or falsity of that statement.

If you haven’t listened to  Telekinesis first two albums, you’re missing out on some of the greatest pop songs so far this decade. Their newest album Dormariontops my list of most anticipated album coming out this summer. The first single “Ghosts and Creatures” is a completely different direction for the band, yet somehow still in their wheelhouse. And it’s just fucking phenomenal. Check out Dormarion and you’ll probably have a new favorite band in Telekinesis. – Ross Bonaime

“The multi-instrumentalist is joined by his wife and musician on the hammered dulcimer and wooden flute for a program of traditional instrumental music. Part of the European Month of Culture. Presented in cooperation with the Embassy of Belgium.”

When Shout Out Louds released their near-perfect pop album Howl Howl Gaff Gaff years ago, they weren’t really coming to the U.S. too often. Now with their new release Optica, I can’t wait to finally see this underrated band after years of anticipation. – Ross Bonaime

Lookin’ to get your trap on? Check out RL Grime’s newest remix and get to U Hall tomorrow night.

Ask practically anyone about Palma Violets and you’ll get an overwhelming response of praise; they’ve been labeled as one of the most exciting bands out there at the moment, and having been signed to Rough Trade, that claim obviously has some serious credentials to back it up. We also have this sweet interview with them to further support your upcoming major crush on these kids – Svetlana

Oh, and The Orwells made it onto our Opening Bands You Should Be Paying Attention To post. Yes, you should click that.

$12. All Ages. Lots of Girl Power. Bonus: you get to check out the awesome new BLACK WHISKEY venue at the same time

In this drunk review of an Airborne Toxic Event show from back in 2011, we note, “Mikel Jollet, apparently, doesn’t need to be drunk to write. I envy that. Oh fans know their first album was written in a week following a break up, his mother being diagnosed with cancer, and his being diagnosed with with a genetic autoimmune disease, and sometimes traumatic events can spur on a wave of writing that can never be quite matched later on, but with the release of their second album “All At Once” it’s clear that neither drunkenness nor trauma are necessary to write lyrics and songs, and do it damned well.”

Ever heard of a little group called Emerson, Lake and Palmer? Check out what this legendary drummer is up to this Wednesday at Howard Theatre.

He’s My Brother, She’s My Sister spent some time a couple years ago touring with Edward Sharpe and the Magnetic Zeroes, which makes a whole lot of sense. Something about them makes me want to say Brady Bunch/Manson Family — and I mean that in the best way.

This otherwise unassuming glitch-hop mastermind who goes by the name of the state everyone would forget if they had to sit down and write all 50 of them down from memory will be joined by Bassdread at U Hall this wednesday to throw down something special for everyone involved.

Marc Brownstein of the notoriously funky Disco Biscuits is hitting up Bmore under the banner of Electron this Wednesday.

Fresh off tours with The Lumineers and Delta Rae, these four massively talented New Yorkers are bringing their eclectic, critically-acclaimed indie-folk chunes to the District.

“Reputedly the best pure singer to come from the ’80s soul era’ releasing a ‘string of memorable hits’ that are STILL broadcast as ‘radio requests’ and played at literally thousands of events around the world including: ‘Fake’ – ‘Criticize’ – ‘If you were here tonight’ – ‘Saturday love’ – ‘Never knew love like this’ – ‘Sunshine’ – ‘Secret Lovers’ + many more.”

Her wheat-colored hair, elfin nose, and sprite-like baby blues suggest a teenybopping chanteuse who aims to please. But Stern is a gale of a gal, the Galadriel of the indie scene. She cites Sleater-Kinney, Hella, and Don Caballero—bands with more conventional punk-rock credentials—as major sonic influences. Technically adventurous, and musically dexterous, she’s knocking folks dead with some of the most scintillating noise ballads in recent years. Come see her shred her way through “Chronicles of Marnia” and never look back – Svetlana

If the songs MS MR have released thus far from their debut album are anything to go by, this is a top contender for make-out album of the summer. Catch them at SWEETLIFE festival on May 11 before the album releases and all sorts of unholy hype takes them over- Svetlana

“We are celebrating 2 years of Maracuyeah DC!!! Nu Tropical // Latin Underground sounds, brilliant vanguard artists from near & far + 37 or so sweaty dance parties!!”

We witnessed the lovely Josh Ritter at 9:30 back in 2010, and “There were frat boys spilling beer on their Springsteen shirts, hipsters with hands tucked in skinny jeans, adolescent girls screaming “I love you, Josh!” and older couples obviously not used to being out so late.”

The use of the panda embodies a culmination of symbols relevant to the band. The panda has always held significance in Chinese culture, it’s black and white fur viewed as the living embodiment of yin and yang. Other than China, the only other place in the world that has bred pandas is the National Zoo in Washington, DC. Naturally, the panda is the fifth member of Violet Rocker, providing balance to the group, completing the star for all to see. (via Violet Rocker website)

This isn’t one of those “World’s Best Coffee” scenarios. These guys actually are the #1 tribute to Springsteen on the planet.

“Before 2012 Duke Dumont was known as a ‘producer’s producer’. He was the name on a 12” record the DJ knew to reach for when he wanted to please the crowd, without them knowing who had constructed the mesmerising sonic confection they were dancing too.”

Because, since the first day we laid our eyes on Har Mar (which was, oh, HALF A DECADE A GO) – he has not failed us once in the sheer entertainment department. And also because we now REALLY want to ask him what it was like to guest star on PITCH PERFECT. – Svetlana

“Curren$y is now gearing up to release his fifth and sixth studio albums Muscle Car Chronicles and the anticipated Pilot Talk III. Fans eager for the new music can should keep an ear out for a new mixtape produced by infamous producer Alchemist (Eminem, Nas, Snoop Dogg, Ghostface Killah) entitled Covert Coup which will be available April 19th on iTunes, just in time for the 4/20 holiday. The release of the mixtape will coincide with a promo tour that begins that night in New Orleans.” 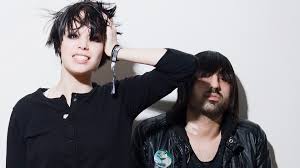 Crystal Castles bring their darkwave/gothwave/nowave/everywave dark electro act to Baltimore. After having seen them several times in DC the last few years, we can confidently say this will be a dramatic, explosive show of dancing to some moody tunes.

Between his numerous DJ gigs, Matthias Tanzmann also produces consistently groundbreaking music. In addition to a line of singles, his first solo album “Restless” was released on Moon Harbour in 2006, and beyond that his remixing skills are also in great demand remixing for artists such as Moby, 2000 and one, Josh Wink and Booka Shade to name just a few. (read more at residentadviser.net)

The first thing I thought when I heard, “Retrograde,” James Blake’s first single off Overgrown is “damn, Blake got sexier.” Everything Blake does here feels stronger than it was on his great debut album, and Blake sounds like he’s giving Justin Timberlake a run for his money in funky sexiness. – Ross Bonaime  (And thanks to the organization of P4K, you can now hear 40% of the album through these links: Our Love Comes Back, “Voyeur”, “Voyeur (Dub)”, “Digital Lion”, “And Holy Ghost”, and “Retrograde”) – Ross Bonaime/Shauna Alexander

If us simply saying “TAYLOR SWIFT @ VERIZON CENTER” is not enough, read this heartfelt essay about RED Andy wrote. It WILL make a difference.

Hailing from Joplin, Missouri, The Ben Miller Band is a one-of-a kind trio that combines the frenetic energy of bluegrass, the soul of the delta blues and the haunted spirit of Appalachian mountain music.

Go check out these take no shit, pull no punches rock stars in Baltimore this Sunday.

It’s the week for trap music ladies and gentlemen. Check Watapachi’s soundcloud and get out this Sunday.

Racks err’where. The 3*6 mafia man now famous for “Bandz A Make Her Dance” slowrolls into Howard Theatre to offer up drugged out raps spit with a Memphis lilt.

Find this guide pretty handy? Of course you did. You should  definitely check out our Spring/Summer Music Guide, ’cause it’s got a lot of things in it you’d be cooler if you knew about in advance.