The weekend before Pitchfork, I helped run a comedy festival. Helped is an understatement, but it feels like the least selfish version of the truth. I haven’t slept right in weeks. I’ve been listening to the Hold Steady almost exclusively for days, and it’s put me in a really weird headspace. During the hour-long commute after work every day, I have to talk myself into actually going home instead of driving until I find something to make this feeling in my chest go away. A new city? A cliff? I’m not sure.

5 nights of driving, 1 tiny nap, and then I’m going to Pitchfork for the 7th time. I go every year with my closest friend since I was 16. We haven’t talked much lately. While we get ready, she tells me about a trip to Ecuador with her boyfriend. I tell her a little about men I’ve flirted with and a little less about one I was angry at. We talk about our jobs.

We get to Pitchfork late and immediately begin our Friday night tradition of hunting for free stuff–a screen-printed totebag, some Twinkies, free beer from people I know. We don’t see any bands for hours.

I’m double-fisting Green Lines when I run into my friends, the Puterbaugh Sisters. We spend at least an hour together not paying attention to music. We talk about the desperate loneliness of being strong women or maybe just women in comedy. There’s no solution, so I leave to get more beer. 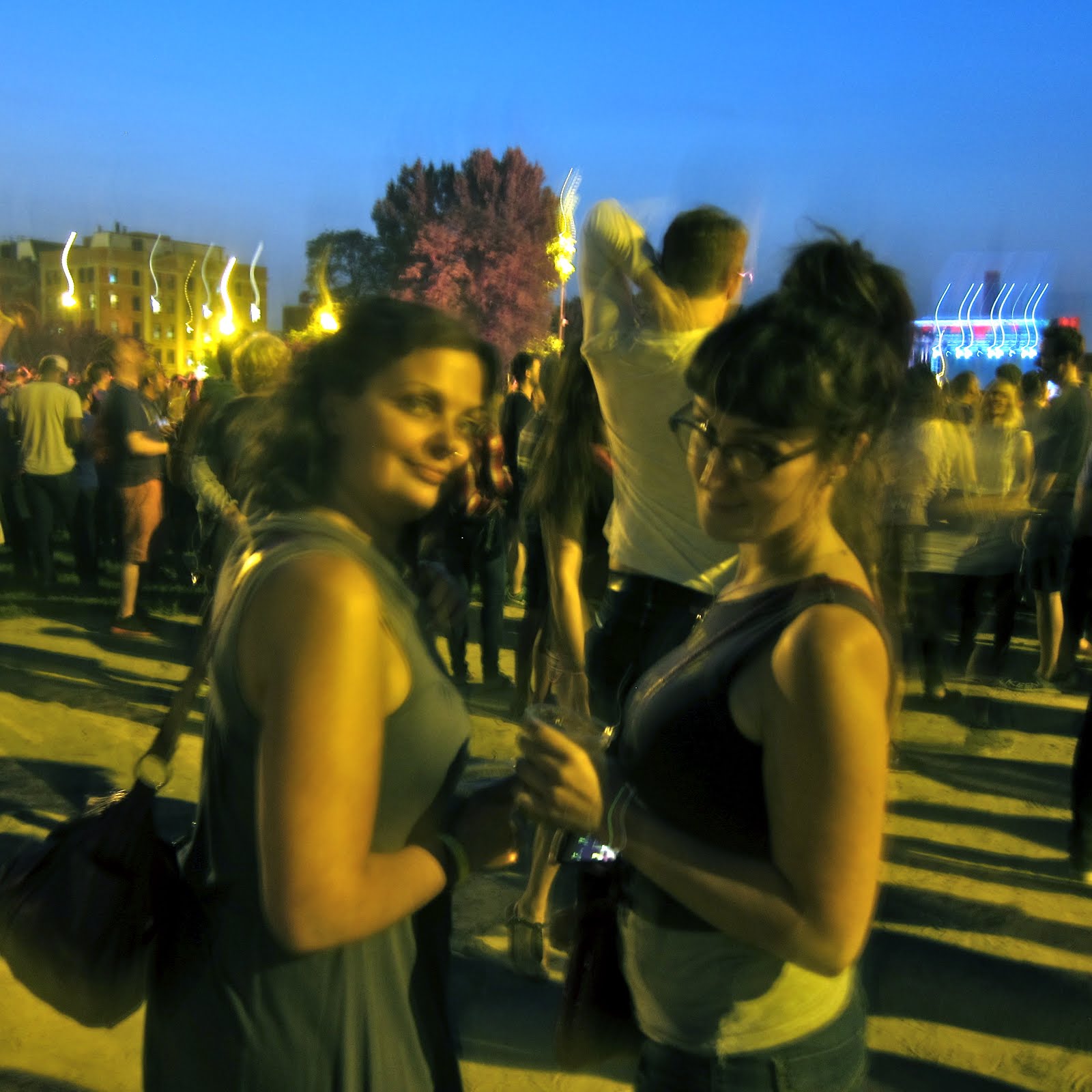 Beck starts playing at some point. It feels strange. I could’ve sworn his music was important to me when I was young. I listened to Odelay so many times, trying to figure out how music could sound like that. Mutations was a mainstay in my sad early teens. But listening to Beck now, seeing him with a light show in a giant crowd, none of it felt consequential. Maybe it wasn’t. Maybe it was just catchy, and I didn’t have enough options.

I’m not a monster–Beck was great, but he was great like an arena act for aging hipsters. I expected feelings. I was wrong.

My friends and I are far back on a baseball field, trying to place Beck albums in time around our shared experiences. We start talking about September 11th. Carmen and I were freshmen in college. My boyfriend at the time was in basic training. It was a weird year for Midnite Vultures to be so big. Our younger friend overhears part of this and says, “You know who died in 2001? Aaliyah.” Aaliyah and 3,000 other people who didn’t make hot jams.

After Beck, I walk a couple of miles to the train to avoid the crowds and clear my head. I congratulate myself on how quietly I’m walking, because if bad guys can’t hear me, they might not find me. I get home. I write this.

I go to a friend’s for brunch in the morning. I get very, very drunk on bloody mary’s. I yell with another woman–a new friend named Samantha–about the impossibility of dating. She came from Brooklyn to see Kendrick Lamar. I take a nap in the middle of the party. I wake up to meet my friend’s baby. She keeps telling the baby that his dad likes me in a way that makes me worry one of them is judging me. By the time we get to Union Park, I’ve just missed the Cloud Nothings and have a stormy hangover. 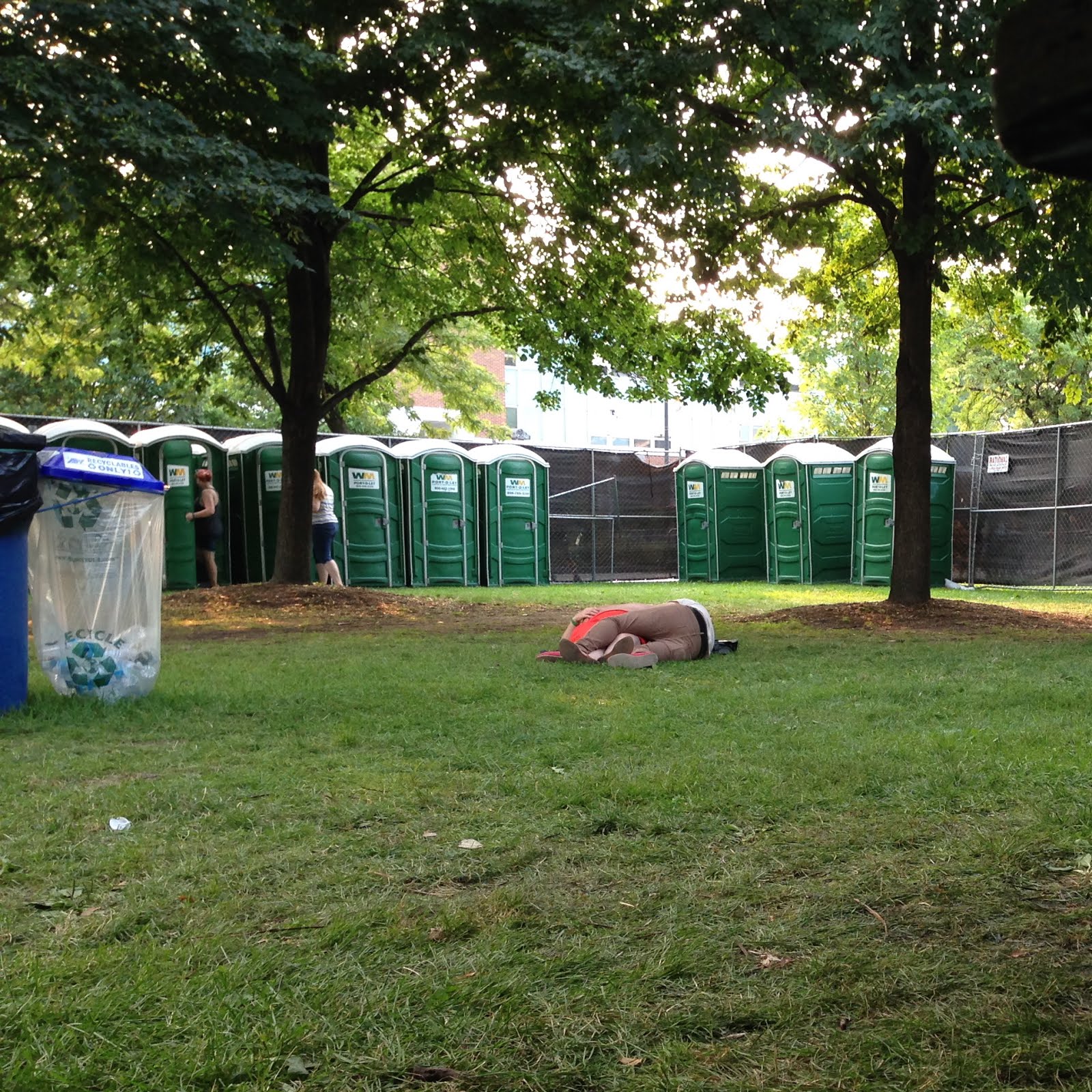 Love in a hopeless place, or something more topical.

I see the beginning of Kelela’s set. She’s really charming–so appreciative of the crowd–and the music is pretty, but I have trouble relating to anything that doesn’t have guitars in it, so I leave to find cheese fries and iced coffee. 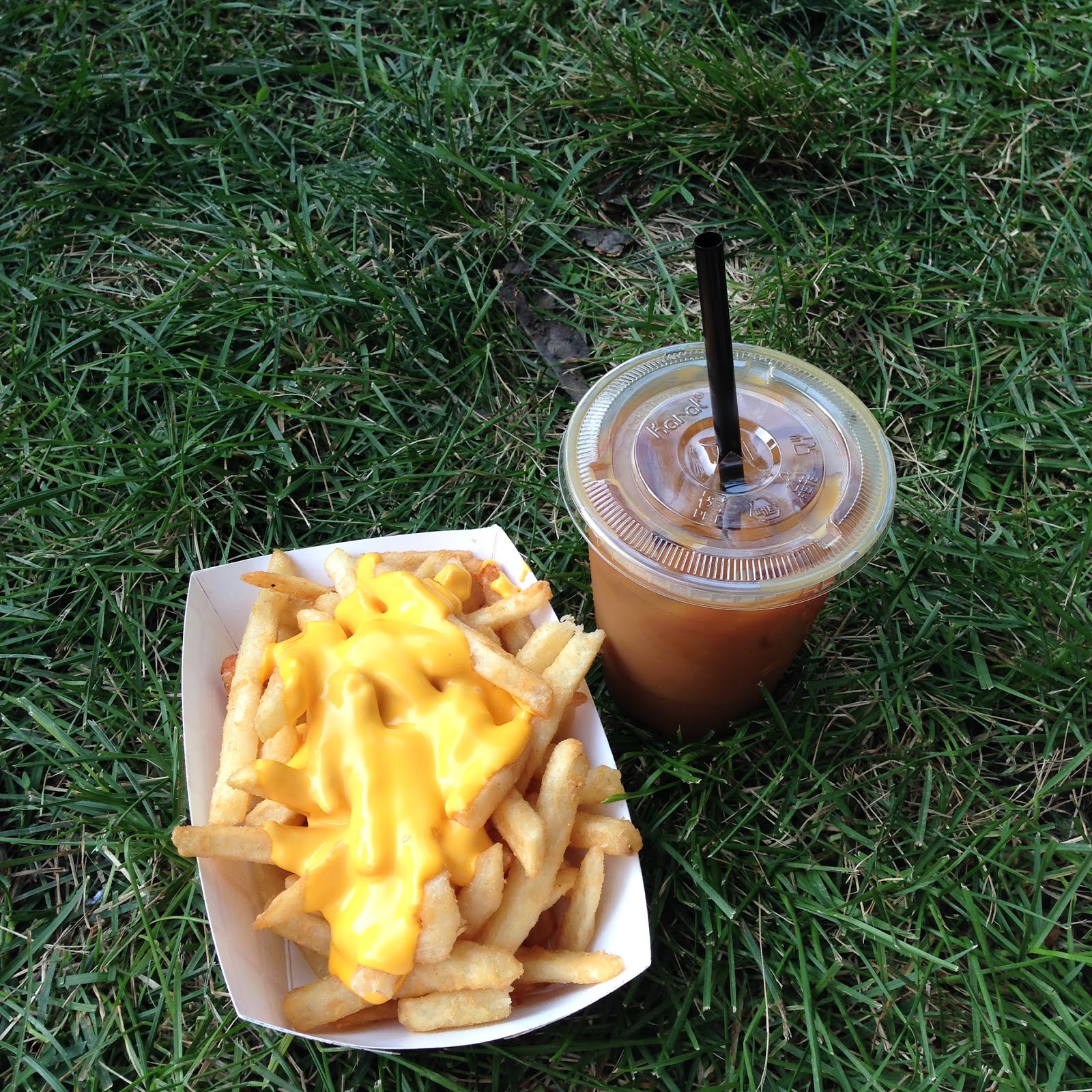 The first full set I see is St. Vincent, and she blows me away. I didn’t expect her to be great. I’ve never seen her live–I was expecting something artier, but she’s in full-on rock mode and I’m loving it. She’s got a cool gold thing on her shoulder, she’s stomping around in heels, she shreds.

Neutral Milk Hotel starts immediately after her and entirely without fanfare. Compared to St. Vincent, it seems like they didn’t finish their sound check. Halfway through their set, it seems to come together, but it almost doesn’t matter. Everyone who stuck around is old or thinks they are. We just want to hear someone sing about feelings. I almost cry during a song I don’t even recognize. I pull it together because this write-up is already too emotional. 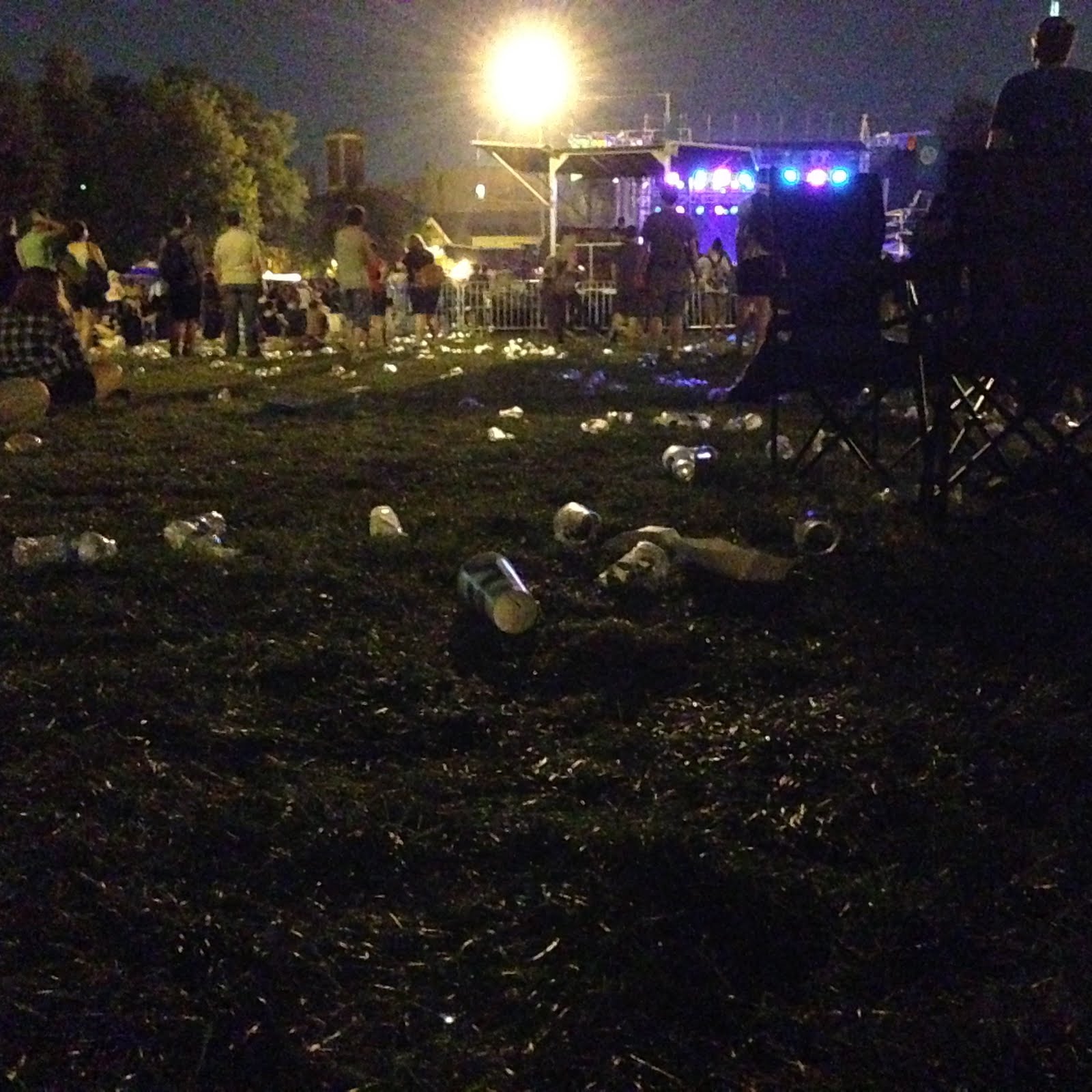 I start the day exhausted. As I walk off the train, I think about how embarrassing it is to be alive. I try not to focus on it because I’m trying to make mistakes this morning.

There’s a new trend in festival swag that involves free, mystery haircuts. I don’t fear death or looking a little stupid, so I’ve been fixated on this since I first saw them at SXSW. I sign a waiver and wait on the Ray-Bans-sponsored stage. I’m wearing Ray-Bans. I feel OK about it. I talk to a woman whose boyfriend is unknowingly being given a very uncool mullet. I get the same barber, but he doesn’t want to ruin my life by shaving my head or giving me a mohawk.

“So you only ruin the lives of the boys?”

I’m 10% relieved that I won’t have to explain anything to my coworkers, 90% disappointed. 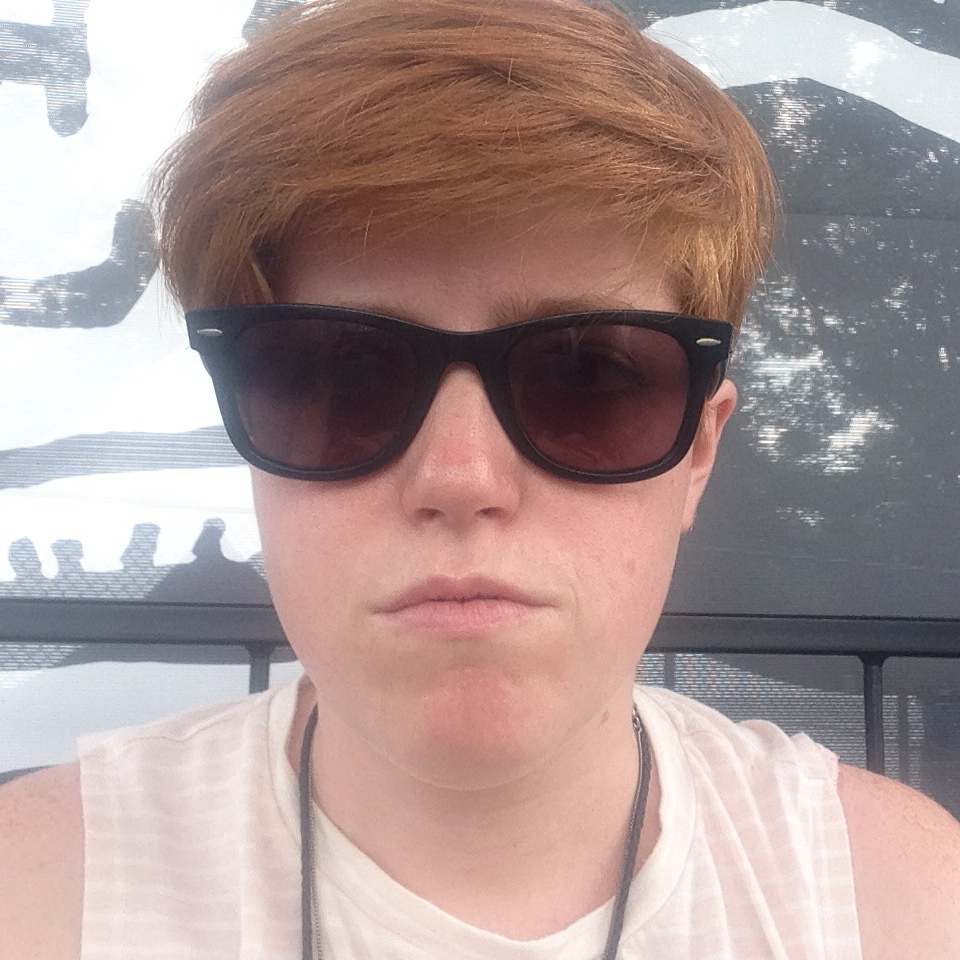 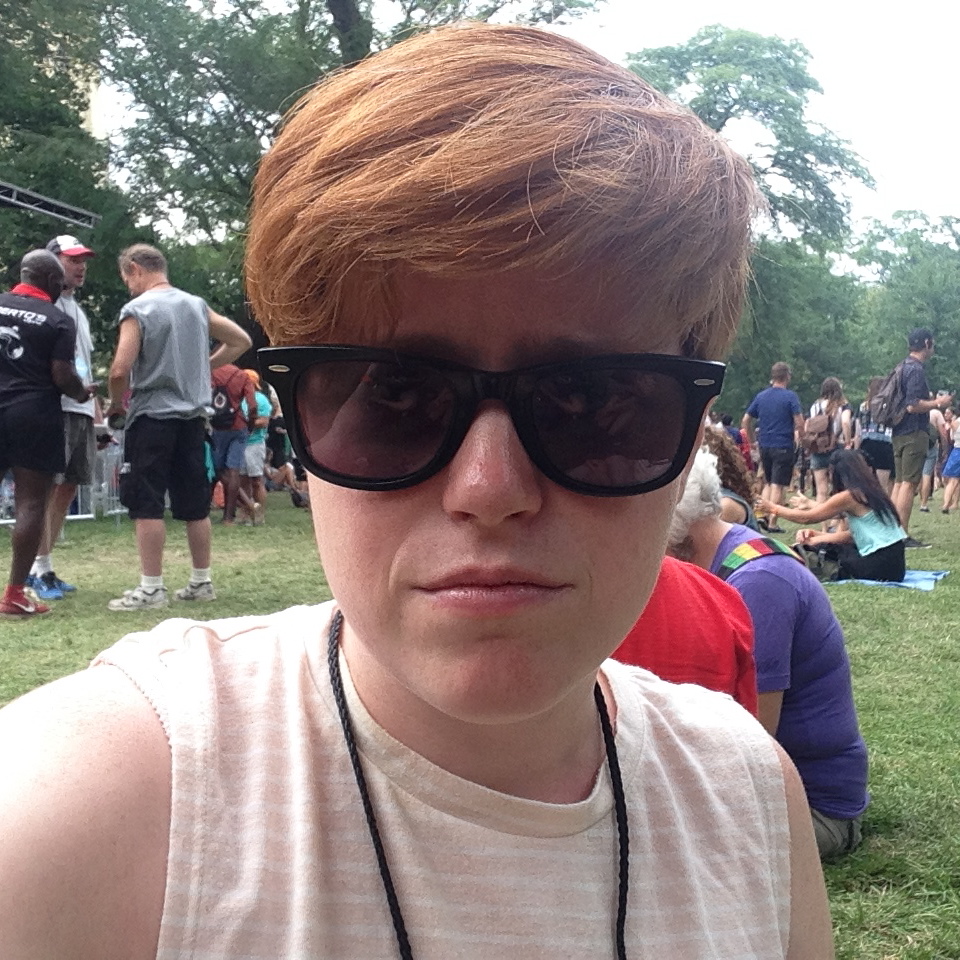 Now covered in strangers’ hair, I wander to the blue stage and catch the end of Speedy Ortiz. They’re singing about making out. I’m into it. Perfect Pussy is up next, and I feel so relieved to have a break from ethereal women with drum machines.

While Carmen and I wait for Perfect Pussy to start, we wonder why no one takes photos of us anymore. The audiences were a lot more High Fidelity when we first started coming, and we stood out. Now, I don’t know any of the bands. Carmen keeps offering me a face powder that eliminates fine lines and wrinkles. 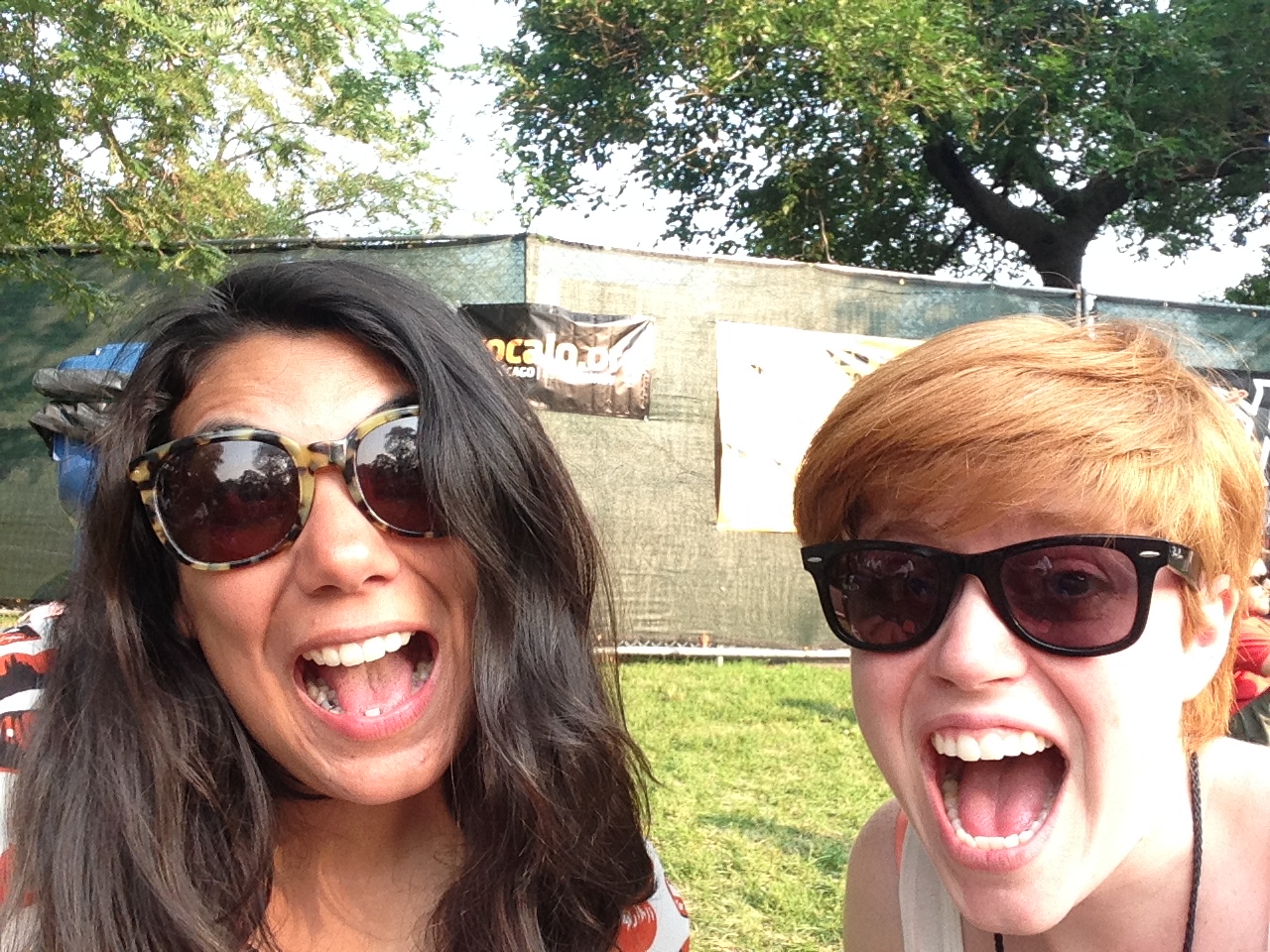 No one photographs yelling 30 year-olds.

Perfect Pussy is invigorating. All the teenage boys go crazy for Earl Sweatshirt. Schoolboy Q seems like he’d be a blast if I wasn’t half-asleep and full of gelato. 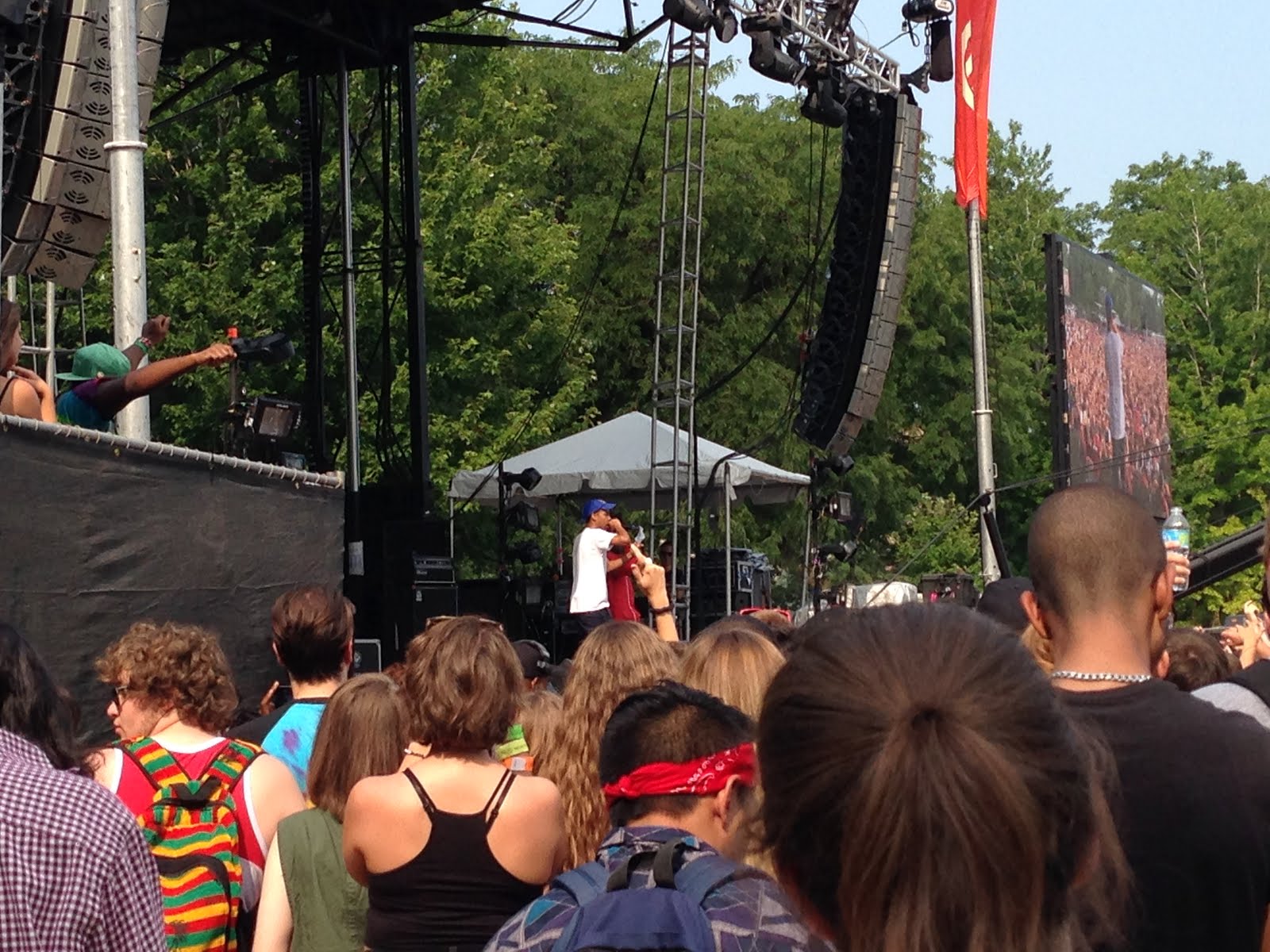 In the early evening, I catch some of DJ Spinn, and this is when I start to get confused. There’s dance music and a couple dozen people on stage. They’re fun to watch, but I can’t figure out where the music is coming from or what I’m really looking at. Everyone is having a great time. I’m wrong again. 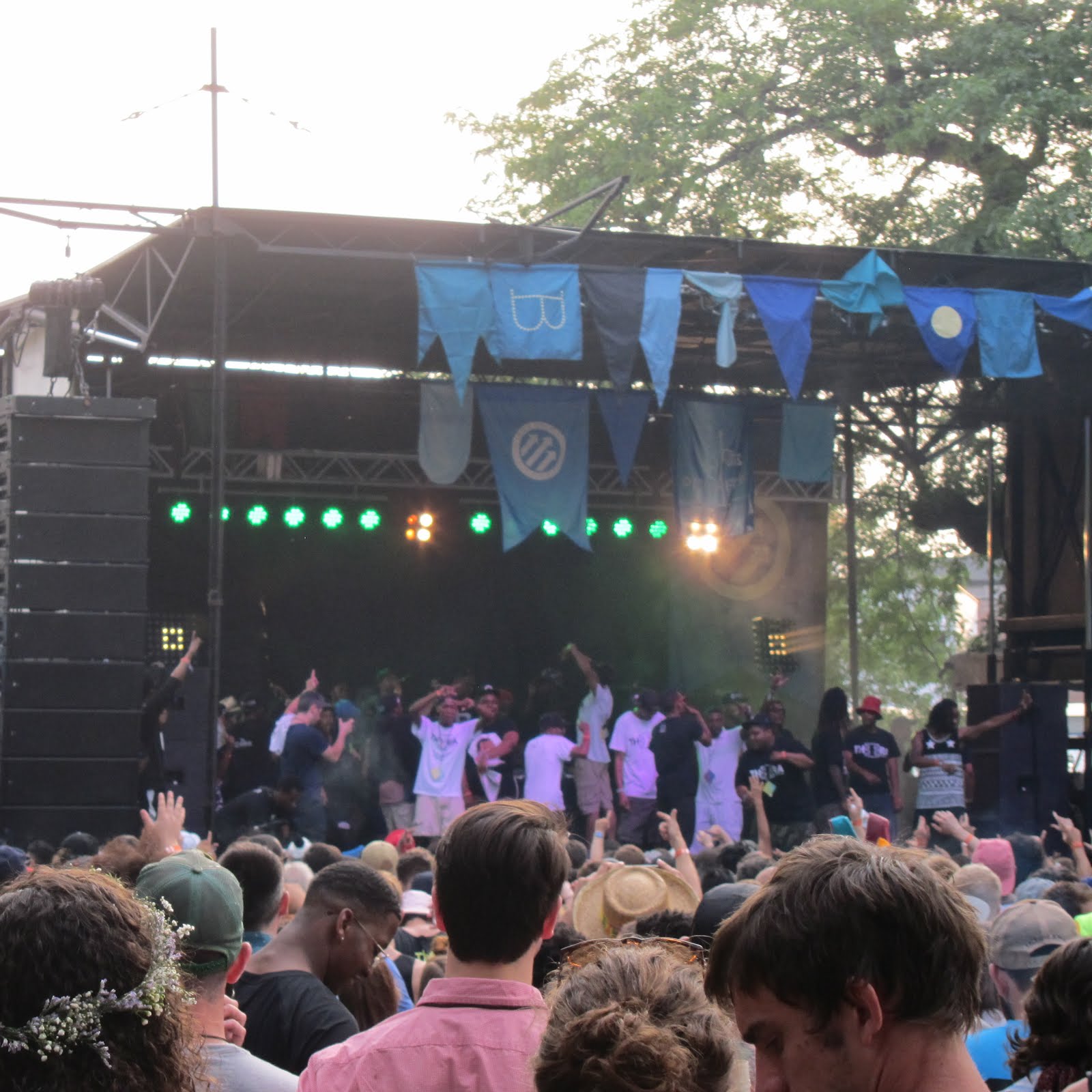 I leave to watch Grimes. I don’t know anything about Grimes. The friends I sit with say that she’s like a politically correct Britney Spears. That doesn’t help. She spins knobs and lip syncs very badly. I hate it. A drone flies overhead. I hate that more. 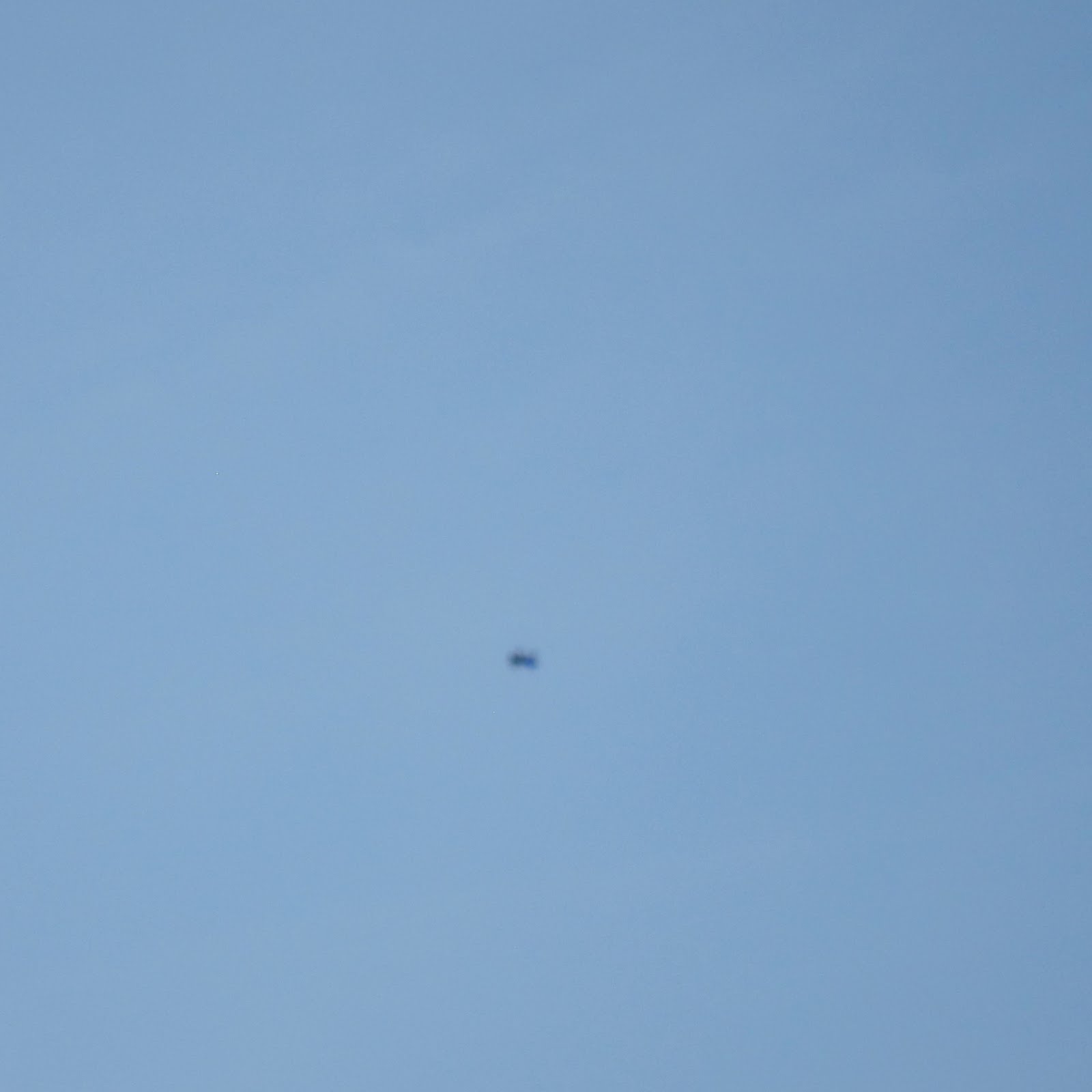 It’s hard to photograph a drone.

My friends leave to get closer to Grimes and get up front for Kendrick Lamar. I run away to a comedy show. They said he was fun. I’m very tired. 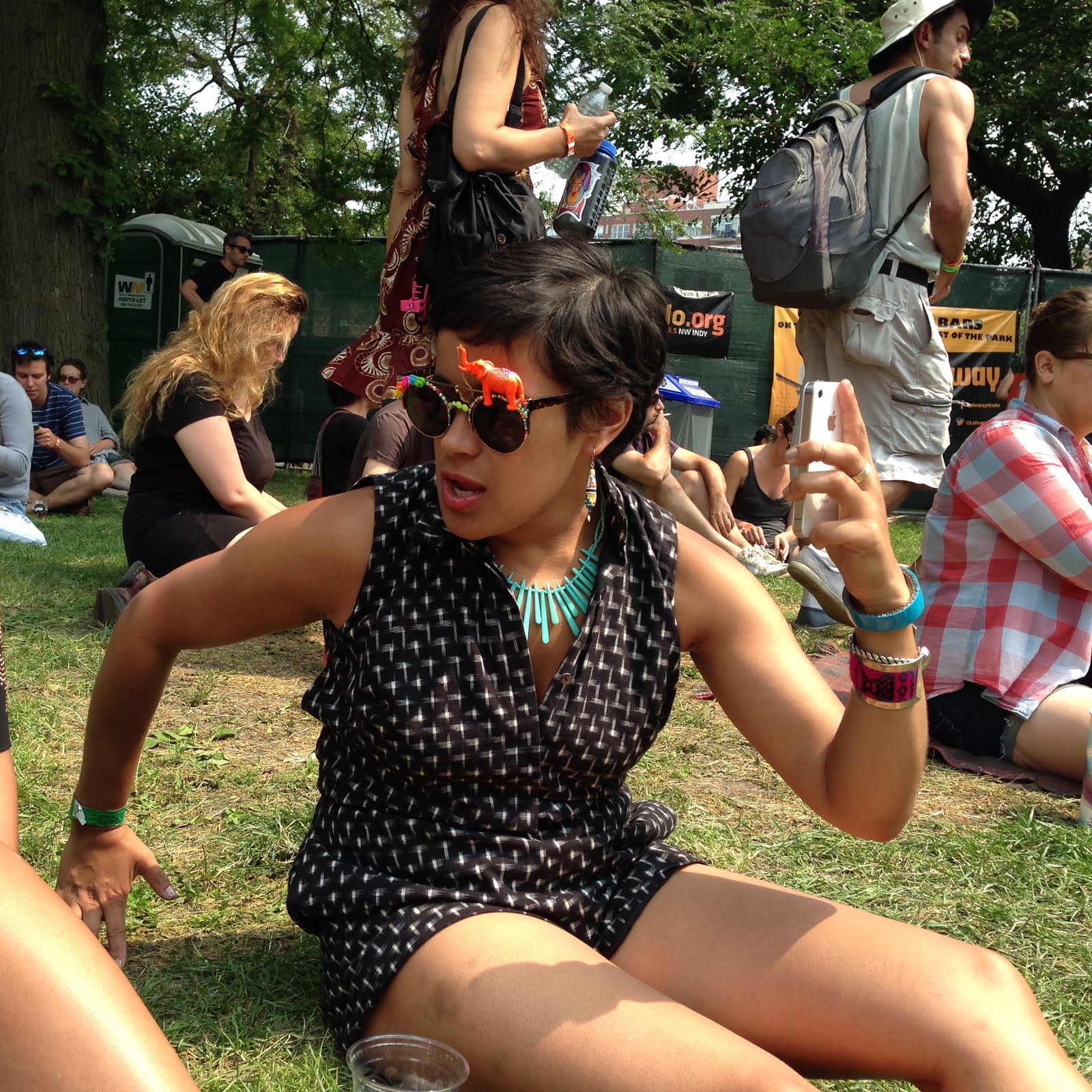 Some of my friends are younger than me and understand Grimes.