Photo for BYT by Shervin Lainez

When DJs Matt Bailer and Shea Van Horn started their monthly party Mixtape three years ago, they did so out of necessity.  “I can’t be the only person who wants to dance to a little Italo-disco or acid house or early Wax Trax! recordings. But, I’m not hearing that anywhere,” Van Horn told BYT in a preview piece before the launch of their party in 2008.

As Mixtape marks its third anniversary this Saturday at TOWN nightclub, the party will be one of a plethora of alternative events in DC’s gay nightlife scene.  It may be hard to recall, but when Mixtape started out in September 2008 at the U Street Eritrean restaurant Dahlak, there were few gay options beyond traditional dance nights at gay bars (only the occasional Taint parties at the DC9 and Homo/Sonic at the Black Cat were in existence – both now defunct).  Mixtape changed that.

The party’s huge success – it kept outgrowing its venues – allowed for others to try their hand at creating unique gay parties. Among those were She.Rex, Beat City, Shift, Maison, the Pocket Gays, Pink Sock, Siren, Bailer’s own 90’s dance night Peach Pit 90’s, and Van Horn and DJ Bil Todd’s dark disco spectacle RAW.  With the success of Mixtape, Bailer and Van Horn helped establish Washington as a center of creative, gay life. 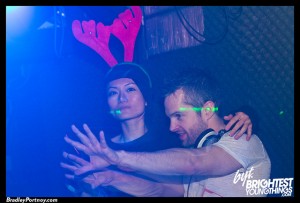 Over the last three years, Mixtape has become the party to hit if you want to dance, get laid, or be seen.  Its success largely stems from its ability to introduce divergent populations to new music, tantializing them with a taste of something they normally might not listen to.  The party’s approach has been inclusive, and tight jeans line up next to polo shirts in line to get in.

The lines are especially long when the rotating Mixtape party is held at the Black Cat on 14th Street.  That’s where the party will finally settle later this fall as it makes it its permanent home.  In the meantime, Bailer and Van Horn plan a gigantic blowout celebration at TOWN this Saturday.

Mixtape’s Third Anniversary at TOWN
Saturday, September 10th
$8 before 11 / $12 After – Details on AllCity

An Evening with Colin Hay (Solo)