After the crotchety old man fireworks and glow people ascendance and boiling temperatures of 2014’s Hopscotch Festival, the fifth year of the Raleigh gathering felt like a much needed cool down.

The headliners were perhaps a little more subdued. Dwight Yoakam is sequined cowboy assassin, but he doesn’t open up the middle of the earth and summon an army of rock people like Mastodon. TV on the Radio has heart and shirt-rippling sonics to spare, but it doesn’t pack quite the pop punch of Spoon and St. Vincent. And while Godspeed You! Black Emperor can conjure apocalyptic grandeur, that wasn’t exactly the warm Thursday reception that De La Soul put on last year.

Then there were the things that didn’t happen. Owen Pallett had been billed to both perform and serve the “improviser-in-residence” function, but had to cancel on Thursday due to a family illness. Deerhunter pulled the plug on its appearance a few weeks earlier. Metal band EYEHATEGOD bailed for personal reasons as well. And there was a rumored attempt to land a D’Angelo set that didn’t come to fruition.

Still, it’s a little silly to focus on what didn’t happen when there was still so much good music to see and here. In fact, at times it could feel like there was too much. From Phil Cook’s triumphant album release show to Battles chiseled precision to HeCTA’s subterranean elctronica to Goldlink’s rambunctious energy, Hopscotch proved yet again why it’s one of the best curated festivals on the East Coast.

Below check out some photos and coverage of the festivals. We’ll be adding more recaps over the course of the day. 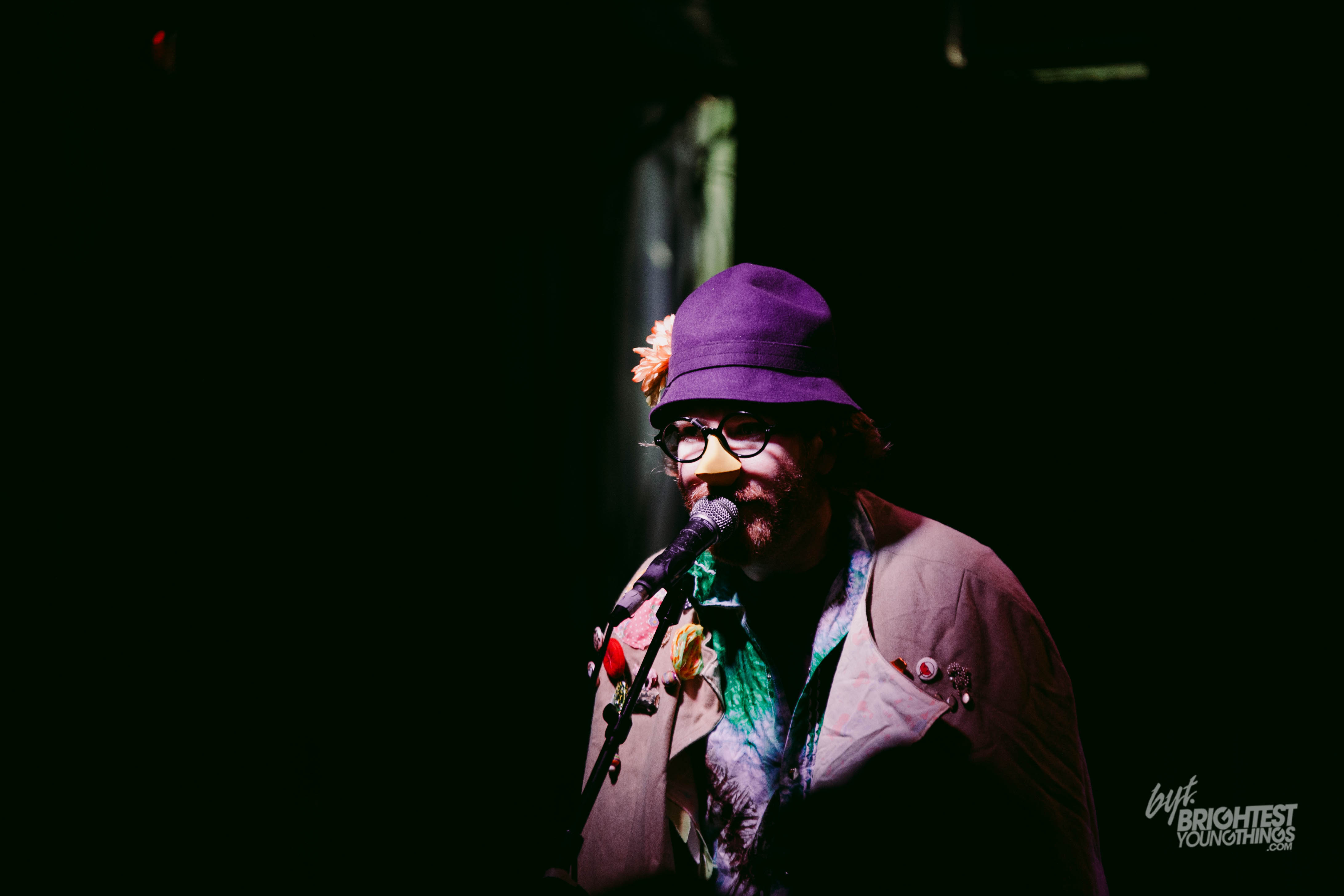 Sitting with Ought an hour before it took the main stage in the Raleigh city plaza, I didn’t get the sense that the Montreal four-piece was particularly high on the spoils of a mid-tier festival.

Gathered around a picnic table in the VIP tent, each member perched atop a white faux-leather stool, the band could not have appeared more wary of the scene around them – the oversized vases filled with candy, the slick yet comfy lounge décor, the old dudes inexplicably dressed in white linen. And for the love of god, why were the classic ‘80s arcade games incessantly bleeping and blooping at such a volume?

When a lurking photographer started snapping photos of the band, drummer Tim Keen didn’t hesitate to ask what exactly the band’s likeness would be used for. “I don’t want us to be used to sell, like, Red Bull,” he remarked to me a moment later.

But here’s the catch: Ought sounds incredible on a big festival stage.

Filling in for Deerhunter, the young Constellation Records act didn’t miss a beat. The old songs sounded fuller, and while the new songs from its forthcoming Sun Coming Down can at times be tangled and dense, every single one just jammed on this night. You can understand why these guys wanted to get these songs out and tour behind them.

Lead singer Tim Darcy in particular seems built for a larger stage. At smaller venues, there’s something about his vocals – exaggerated and undulating and theatrical – that feels a little too precious, but here, projecting to the back of a huge crowd who were mostly unaware Ought existed prior to this day, he’s every bit the band’s biggest asset.

Later in the night, it became clear that there were some festival perks that Ought was indeed amenable to – namely, artist wristbands, which I would see the band using to drop by Lincoln Theatre for Advaeta’s set after Godspeed.

Near the end of his Lincoln Theatre set, Mac McCaughan took the opportunity to offer some words of wisdom.

“I hope you enjoy the rest of your weekend,” the Superchunk frontman and Merge Records co-founder told the crowded room. “But it’s just getting started, so pace yourself, motherfuckers.”

This is precisely the kind of advice you expect to hear from indie rock’s cool dad.

And as was the case with his East Coast tour in May, cool dad brought the kids with him on Thursday night.

Since the release of this year’s bittersweet reflection on youth, Non-Believers, McCaughan has been performing with  Flesh Wounds, a machete sharp garage rock trio from nearby Carrboro. They’ve adorably taken to calling themselves the Non-Believers for such gigs. And if the sight of a scrawny Montgomery Morris – tattoos overflowing from his shirt sleeves, cut-off shorts not quite reaching his knees – shredding alongside McCaughan and his drenched short-sleeved oxford doesn’t warm your heart, it’s because Flesh Wounds already ripped it out.

I know what you’re thinking. There’s almost invariably a whiff of desperation when an elder statesman recruits a much younger backing band. That’s just not the case here. McCaughan sounds invigorated, the muted and synth-washed songs of Non-Believers take on a entirely new verve, and Flesh Wounds gets a chance to flex its chops.

This union was an eyebrow-raising idea on paper and it’s flawless in execution. I don’t know how the politics shakeout given McCaughan’s other – still great – rock band, but it’s hard not to want these four to get into the studio, at the  least to capture these versions of McCaughan’s songs. (Think Dan Bejar and Frog Eyes Notorious Lightning and Other Works.)

At McCaughan’s Black Cat show this spring, he closed with a neck-vein-bulging cover of Chris Knox’s “Pull Down the Shades”.  On this night, that honor appropriately went to ANTiSEEN’s “NC Royalty”.

For over twenty-years, that’s exactly where McCaughan has found himself – somewhere between anti-scene and North Carolina royalty.

With an iconic voice and a deep catalog of hits, Yoakam just needs to do is put on his favorite rhinestone bedazzled jean jacket and play, which is exactly what he and his band of Liberace cowboys did on Saturday night.

It’s hard to overstate the efficiency of his operation: This was essentially a continuous mix of tightly stitched traditional country; pretty much every song beginning a half beat after it’s predecessor had ended. It was refreshing in its own way: There was a lot to get to, and they didn’t want to waste anyone’s time.

“I’m going to meander a little,” Yoakam told the crowd during a rare pause. “If you hear anything you know and like, holler out.”

There would plenty of hollering, particularly as crowd’s country music tourists thinned out to head elsewhere, leaving behind those who traveled downtown with explicit purpose of seeing Dwight Yoakam on this evening. One gentleman I spoke with drove all the way from Tampa for these 90 minutes. I remarked that he bore a resemblance to Willie Nelson and he lifted his sleeve to reveal a tattoo of Willie Nelson’s head.

Unsurprisingly, Yoakum doesn’t do much in the way of dancing, but the 58-year old does have more moves than Willie. Well, he mainly has one move where he steps back to do a reserved side pelvic rotation, like he’s nonchalantly tossing a boomerang with his crotch.

It was slightly reminiscent of Elvis’ shimmy, so it was only fitting that Yoakam would close his set with a cover of “Suspicious Minds”, a song made famous by the King. Apparently, this is a song that Yoakam recorded for the “Honeymoon in Vegas” soundtrack twenty-three years ago. There’s even a video for it where he mean mugs at the camera while at times being chained to model wearing looser clothes than his.

I knew none of this.

But I do know that I recorded 45 seconds of this cover and have listened to it about 45 times.

Slim’s is a glorified shoebox. There’s a bar that stretches across a significant chunk of the room, and if you’re caught between it and the corresponding wall during a crowded show, each sip of beer is a temptation of fate. The slightest nudge or elbow from any of the eight people within your immediate proximity will result in the wearing of your beverage.

This was especially true during Sheer Mag’s set on Saturday night, when the line stretched several storefronts down the street and those lucky enough to get in pushed their way towards the corner stage.  If you were more than ten feet away from the band, it was hard to make out more of singer Christina Halladay than the bleached blond top of her bobbing head. At times like these, Slim’s feel more like a DIY space or pop-up venue, which on this night was fine, because Sheer Mag can chew up, spit out, and light on fire a small venue.

Aside from capacity restrictions, there’s no barrier of entry to a Sheer Mag show. Whether or not you’re familiar with the Philadelphia band, you’re in its pocket before the first song’s over. This was the case when I saw them at Hotel Vegas during SXSW, and it was even more so almost seven months later in Raleigh. Part of it’s the instant familiarity with their succinct mix of 70s glam and cock rock, which explodes live, untethered from the tin can production of the band’s EPs. But let’s be honest: There are plenty of bands that mine classic bar rock, and whether a band elevates the format often rests most on who’s behind the microphone. It’s what separates the Hold Steady from Free Energy or Diarrhea Planet.

Fortunately, Sheer Mag has Halladay, whose rafter-blowing charisma is impossible to resist. On record, there’s an androgynous quality to her vocals – slightly reminiscent of a Jackson 5-era MJ singing his face off. In person, it’s much more formidable instrument, and one it’s a wonder she doesn’t lose every night.

If this band has the means – or desire – to capture this in a higher fidelity, it won’t be playing shoeboxes a year from now.