The Final Countdown for Turntable.fm

Turntable.fm, yet another example of the fundamental unfairness rule of the internet, is closing tonight. Like Couchsurfing, Livejournal, and other sites whose simple purpose became the basis for a lively thriving community, but whose owners could never get over the daunting task of turning a profit, it goes to show that just because something is popular and seamless does not translate into long term viability. (Tumblr and Medium powerusers take note!)

Christian B, bass player for BYT’s favorite goat-rock band Death By Sexy: “For a while there was nowhere better than Turntable to be exposed to new music, thanks to DJs who were constantly trying to out-obscure each other.”

The site was simple. Log in with Facebook or Twitter and grab a name. Then join a room, reading the rules at the top carefully, since unique community created its template for who got to play what when. Create a playlist of your freshest or more perfectly apropos jams, and get on the decks bravely, taking your Boos like a man. (I learned this lesson hard on my first day, dropping a Ra Ra Riot remix that met with icy Down-Thumbs and hard-to-interpret emoticons. I stayed out of Remix territory from then on.) 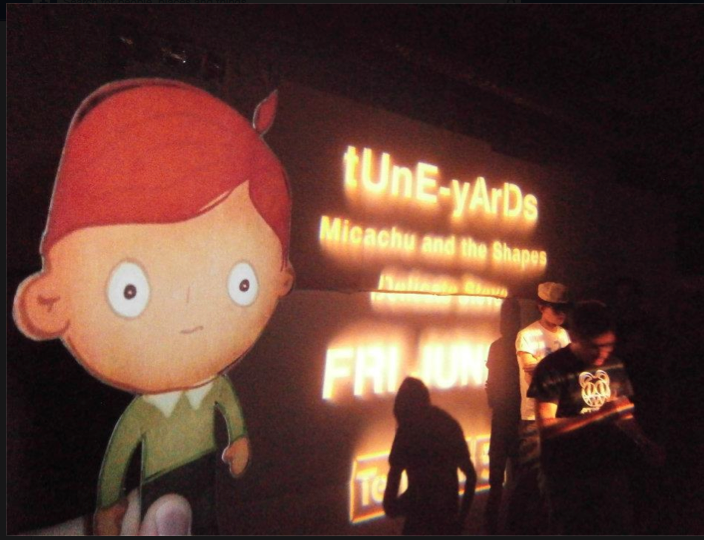 There were “real” metal rooms. There were 70s funk and soul rooms with daily Power Hours of rare cuts. There were Indie rooms where bands (everyone from the Presets to Eve 6) debuted new songs and chatted with fans. There were Dubstep rooms, and No-Dubstep rooms. Actually most rooms were No Dubstep rooms. Up to 5 people could DJ at a time, and users could Thumbs Up or Thumbs Down your selection, and you could trade your Thumbs Up points for cool (though dorky) avatars. But that simple canvas brought strangers together from all over the US.

Desiree D., Tampa Flordia: “I’m going be ridiculously sad not to log into TT every morning… Its been apart of my daily routine for the past 4 years! EVERY morning! So sad.”

A Seapunk kid from Alabama could connect with new bands starting up in LA playing their own stuff, K-pop fans from DC and Omaha could swap tracks stolen from Youtube, and rare soul DJs could add weird one hit wonders to their repertoire that only some old fogey in Wisconsin had digitized from their collection. These are things I actually witnessed, because from 2011 to late 2012 I was entirely obsessed, spending at least every morning listening, playing and shooting the shit with randoms in rooms dedicated to the latest indie releases. I told these folks when I got a new job, when I got engaged, when I moved to a new city, when I needed to vent about various untenable situations IRL. But more than an outlet it was an escape into the rabbit holes of pop music culture. A whole day could go by listening to nothing but late 90s Emo, or Acid Rave, or Songs That Mention Ghosts. One room spent an entire 24 hours only spinning tunes from 2003–I learned more about Def Jux records than anyone should probably ever admit to knowing that day. It was a seminar, a drinking session, and an improv game rolled into one. Plus you could shrink the browser small enough that it could fit into a corner of your screen while you pretended to Excel some spreadsheet pivots or whatever.

Ben S. New York: I had heard of turntable through a blog or social media somewhere, and I randomly tried it out. I had no idea that this moment of curiosity would lead to meeting a wonderful group of weirdos. We’ve gone to music festivals, ski trips, countless concerts, visited each other across the country, we do secret Santas at Christmas – it’s still ridiculous if I think about it. What happened was, you had all these music nerds with desk jobs who were bored during the day, and somehow we all found each other. That’s what made turntable so special.

Of course the biggest hurdle for the site in the end was licensing fees–the bane of all streaming services. At first TT maintained its own library, comparable to Spotify, as well as enabling uploads, but then when those costs soared as the site became more popular they got rid of both options and operated all music streaming through Soundcloud–a solution they probably should have looked for in the first place. Most rooms existed to drop new or rare tracks into the mix for music fanatics, not rehash Beatles or Madonna hits. But by the time they made the switch it was too late. Their venture capital had dried up and nobody was willing to bet more millions on providing a playground for music nerds. Spotify is just starting to offer a similar service (Soundrop) and there are somewhat decent alternatives (like Plug.dj which allows only streaming through Youtube videos as well as Soundcloud) but aside from all the UI differences, what won’t be exported easily are the networks created over the past few years.

Rafael G. founder of Brooklyn music blogs Brighter Sounds and Heartsoulblog got into blogging after finding a group of like-minded indie-disco fans on Turntable: “I remember spinning tunes with other writers I already looked up to and them digging my taste and asking if I wrote. Not to mention the whole aspect of just sharing tunes with Turntable inspired me to want to dig for tunes and share with everyone I knew on my blog.”

Michael W., Pittsburgh: I’ve been online since 1994. Turntable is the first site where I felt like I was part of a community. I’ve yet to meet anyone from here in real life. Never able to make the meetups. But it’s been a meaningful part of my life.

Tonight at 10pm EST the site is shutting down (well they will keep trying to make something called Turntable Live happening, but as a free service for it’s users it will be done). I’ll be in Turntable.fm/indiemix if you feel like dropping by and sharing a final few jams and emoji puns. As offline communities disappear, and “scenes” are harder and harder to find even online, as walled gardens like Twitter and cesspools like Reddit drain forums and blogs of their users, we should all mourn the opportunity to connect through a shared love and knowledge about something. After today, the algorithms will choose your soundtracks. Until then, let’s Bop as hard as we can.

Power user Kloi: It felt like the only place where I had friends and wasn’t lonely. 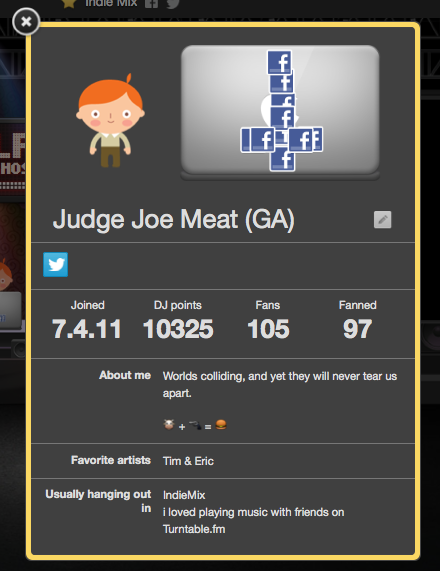