Emi Grate is powerful. She is powerful even where others might find themselves most vulnerable, standing on stage utterly bald and totally nude in front of a giant crowd of strangers at one of the biggest drag festivals. Emi Grate radiates strength. Her arms stretch up in exhilaration, and she throws her whole body into a mightly lip-synced roar, mouth impossibly wide as she channels all the emotion of Céline Dion and more. This snapshot from the most recent Bushwig Festival of Drag is as striking as the conformance it captures, Emi Grate’s “My Heart Will Go On,” lip-sync in which she “strip[s] completely naked as exploring [her] relationship with [her] body.”

#transformationtuesday #tt @bushwig 2018 | 📸: @mikebrand . Starting with the conception of 🅰️➕ leading up to winning @mrsbknyc, my drag was about reflecting on my relationship with the world and people around me. Since then—with the encouragement of my Drag daughter @haveyous1na—I’ve shifted focus to exploring/examining my relationship with my own mind, body and spirit. . “My heart will go on” is the ultimate love song, and I chose to dedicate it to my body—since the longest relationship I will ever have is with my own body—one that is queer/trans, one that is coloured, one that has crossed an ocean and a continent, and continues to take me places. It’s still not the best relationship yet, but then again, self-love is an unending work in progress. . Judging by the roaring reception, I’d like to think my message was delivered. Thank you for sharing this moment with me! . #drag #dragqueen #dragshow #queer #queerart #art #theatre #burlesque #body #bodypositive #selflove #bushwig #bushwig2018 #brooklyn #brooklyndrag #bk #mrsbk #currentreigning #nyc #nycdrag #asian #asiandrag #celinedion #myheartwillgoon #titanic #glitterbrowsforever #emigrateful #emigr8

Based in Brooklyn and raised in Burma, Emi Grate is an activist, a host, and the current reigning Mr(s). BK (drag pageant formerly won by Drag Race’s Aja). The Burmese queen, who came to the US for university, is “all about commitment to oversentimentality.” That’s where her well-known love for Céline Dion comes into play. In addition to the Bushwig number Emi Grate has a rendition of “It’s All Coming Back to Me Now”—“all seven-and-a-half minutes of it”—in which she sits at a piano and pulls off one costume piece after another until finishing with a dramatic collapse. “Her songs are very that. It’s overly sentimental but 100% earnestly committing to that and not just kidding around with it.” This earnestness is part of what makes Emi Grate such a special performer. She wholeheartedly pours herself into each number, captivating and delighting audiences.

So, it’s no surprise when Emi Grate, in all her overly sentimental glory, tells me of her deep love for opera. “I like opera as a medium because it’s theatre, but it’s very strongly influenced by music and drama, and there’s a story arch and costuming and stage directions, and everything comes together. I very strongly subscribe to Richard Wagner’s theory of ‘Gesamtkunstwerk,’ which means, ‘absolute artwork: different media coming together to form a larger piece of work.’” The wholeness of “Gesamtkunstwerk” is a delightful way of configuring Emi Grate’s artistry.

“Drag is performing identity,” Emi Grate declares. “I bring my gender experience into my work and also how I’ve experienced my own culture, how I’ve currently experienced American culture, and how I interact wit other people. They’re all bits and pieces of my identity, and I show the audience pieces of those things sewn together one at a time.”

There’s a unique thoughtfulness to Emi Grate’s drag in this sense. She so deliberately punctuates every aspect of her performance with fragments of memory, emotion, and passion that piece together a fully realized character, an “absolute artwork.” I am particularly moved to learn that Emi Grate plans down to the perfume she wears on stage. “I grew up in the suburbs, and there were a lot of trees and flowers, and my mom was also into perfumes…when she tucked me into growing up, I would remember her smell of white florals and sandalwood. I look for those things in my own perfume collection.” And even her name, Emi Grate, reflects a rich history of different experiences that have made the queen who she is today: “One of my friends asked me, ‘what would your drag name be?’ And by that time I had crossed an ocean, I switched majors, and I also transferred schools. And I was like, ‘oh, I keep moving from place to place to find new and better things, so my name is going to be Emi Grate.'”

Many of the threads that stitch Emi Grate together are based in her culture and upbringing. Whether it’s starting a lip-sync with the opening monologue from Joy Luck Club as a way of thinking through the immigrant experience and parental expectations or taking style inspiration from the Southeast Asian first ladies, politicians, and singers she would see on television growing up, Emi Grate is radically, unabashedly Asian on stage.

Even more radically, take the defiant celebration of Asian beauty and representation at play in Emi Grate’s choice to only wear dark wigs and smokey eye make-up (instead of a cut crease, because “a lot of Asian people don’t have creases.”). Such politics take a front seat at her monthly show, A+, the Pan-Asian drag revue, which brings together Asian drag performers of all backgrounds to share baggage, happiness, and performances. With a special focuses on the uniqueness of the queer Asian experience as well as on the diversity within Asian voices and experiences of Diaspora, Emi Grate calls A+ “a space of queer Asian people, for queer Asian people, by queer Asian people.”

When I ask the former ‘Social Justice Warrior Princess’ about activism through drag, she first informs me that I have used the wrong title. “I am no longer ‘Social Justice Warrior Princess.’ I am the ‘Social Justice Bureaucrat Princess:’ I ask white people to fight for me when I have to say something.” Ever snarkily poignant, even at her most radical Emi Grate finds ways to connect to her audience. “In drag, it’s important to have a middle ground between you, the artist, and the unknown audience. The ideas I present can be very hostile…So, you have to mask it in the form of like a pop song that they already know, and make yourself visually accessible…With drag my process is usually ‘hey let’s find a common ground. You know this already, but on the other side of it there’s something you don’t know.'”

After four years of such varied performances, Emi Grate openly tells me that the experience has helped her “know” herself better. “I actually had therapy today, and how I talk to my therapist is very informed by how I think about my drag,” Emi Grate opens up. “Doing make-up I find things about my face and my body that I didn’t know. Also being up on stage, I find out things about my body that I didn’t know.”

She continues, “This is kind of looking back to my Buddhist upbringing and the idea of meditation. Entertainment and show business is frowned upon in Buddhism, as it takes away from reality: It’s very escapist. But performing actually grounds me more in reality because I’m very aware of things I’m doing with my body and things that are happening to my life and to my body.” I smile as she draws this connection: It’s so wonderfully Emi Grate, the thoughtful consideration of how her art fits into a more holistic view of herself.

A desire to delve further into this self-knowledge is precisely the basis for Emi Grate’s formative rendition of “My Heart Will Go On.” When I ask her what it was like to be naked in front of so many people, Emi Grate admits to being nervous, but also pinpoints the performance as allowing her the opportunity to explore her own sexuality and sensuality, marking an introspective shift in Emi Grate’s drag. Rather than exploring her relationship to other people, Emi Grate now focuses more on navigating her relationship to her own self, body, and emotions. “I wanted to be myself and my thinking was like this is a number with layers: On a surface level it’s a very well known song. And on another level it’s a stripping number. And on the third level it’s about my relationship with myself. And once people saw it, they understood it.”

So, Emi Grate stands on stage at Bushwig, opening her heart to us, naked in more ways than one, yet still more powerful than ever.

Catch Emi Grate every Sunday at Bizarre Bushwick for her weekly drag brunch, where she’ll give some of her zaniest performances, and don’t miss the next installment of A+, on Saturday, November 17 2018 at Bedlam Bar. 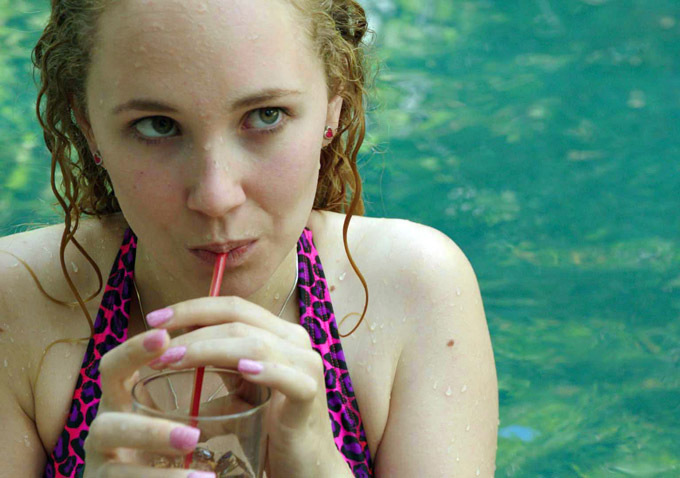