Celebrity Poetry: On the Edge of Poetry

Lady Gaga got down off her soap-box, which in this case is the piano that she stomps on at her concerts, and then crawled through the hitless vacuum she’s been operating from since last year, and made a jazz album with Tony Bennett. The album (set for release in September) along with the Sin City trailer cameo she made at Comic-Con, made last week busy for the queen of the leotard. It makes us long for a retrospective of all her (weirder but lesser-than-Beyonce’s) hits and her countless causes that blur together like clown makeup. In the interest of saving time and avoiding bad meat dress jokes, let’s just take a look at her foray into poetry. 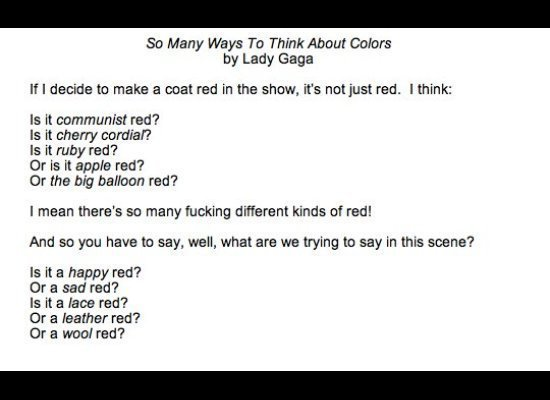 Day: Truly, out of all celebrities, I expected Lady Gaga to come up with some twisted shit. She wears raw meat and the stuffless remains of dozens of Kermit the Frog and she decides to write a poem about what the color red means?

Fecto: Blandness is the least of her problems here. “Ruby red?” “Apple red?” Maybe the next campaign she spearheads shouldn’t be for LGBT rights or feminine body image issues or ripping-off Madonna’s persona, but for re-drafting this one sans cliches. What’s next? Blood red? Red as my blossoming labias? (Actually, that one is pretty solid.) Maybe she needs to call Fred Savage and the rest of the little monsters to help her freak this one up.

Day: Blossoming labias kills it. Although, I always tend to go for vaginal images when writing poetry. Fruits always get the job done. This is how I imagine the production of this piece: she’s high out of her mind, something around her is red, she’s mesmerized. She racks her brain for events or objects that are red (i.e the Red Scare) and tries to apply it to said object that captured her attention. It doesn’t work and I expect more. I want blood splattered faces, Gaga ass-naked in a red hot air balloon freeing a gaggle of accused Communists all chanting “I WANT YOUR UGLY. I WANT YOUR DISEASE.”

Fecto: Oh Christ! Now that’s some scary business. It’s not just this poem that disappoints, but even that her music isn’t so lyrically inventive. With “Poker Face,” she beats the already stock analogy of game-playing and foreplaying over our heads without originality. “Edge of Glory” and “Born this Way,” are also decent pop songs with unremarkable lyrics. As catchy as a spiny protrusion on one of Gaga’s outfits, as entertaining as her barely concealed nipples. But that’s the thing. They’re lyrics that have music to cushion them. This red mess has no such camouflage.

Day: You’re exactly right. I think we’re all (at least I was) excited that she was doing pseudo-performance art in music videos and on-stage that we ignored the lyrics. I was so ready to make her God. I’ll be her little monster or whatever she wants to call me as long as she’s still riding out this wave of making the world uncomfortable.

Fecto: We’re all looking for idols, sure (hence the beehive), but I’m glad it’s not clouding our judgement. My biggest qualm with this piece is the non-ending. She never tells us why we care about colors or cherries or communism or whatever. It’s seems more like something Gaga wrote in the notes on her phone while she was taking a bath–an idea rather than a developed poem (which could have been how she intended it.) I’m sure we all would have been riveted to read more– perhaps Gaga could have explored “sky blue,” “plum purple,” and the kicker, “orange orange” with the same nude, insight-less execution– but I’m glad there’s less to read here rather than more.