Brandon lives in a state of elegance and isolation. He arranges his Manhattan apartment with austere taste, and aside from insatiable carnal desire, relationships do not interest him. Steve McQueen’s Shame is an intimate, bleak look into Brandon’s life. Like Hunger, McQueen’s debut, Shame has the haunting confidence one would expect from a seasoned filmmaker. Takes are long, some lasting for minutes, but never boring. McQueen is too precise for that, and under his observant eye, we see how empty sex can rip apart a man’s core.

Michael Fassbender stars as Brandon, a handsome businessman who designs his life so that everyone is at a distance. He lives alone and has no friends; he goes out with David (James Badge Dale), his boss, out of obligation and not loyalty. The reason for this distance is Brandon’s obsession with fucking. He has anonymous sex with prostitutes and strangers; sometimes he jerks off in an office bathroom stall. The only real threat to Brandon’s isolation is his sister Sissy (Carey Mulligan), a singer who leaves insistent voicemails before she crashes on his couch.  The coexistence with Sissy forces Brandon out of his regimented comfort zone.

Deliberate camerawork helps define the rituals of Brandon’s life. McQueen dwells on routine, so we see how every step and action shape Brandon into a carefully developed, flawed man. The opening sequence, in which Brandon wordlessly flirts with a woman on the subway, maximizes the erotic potential of every hand placement and furtive glance. And for every time where we see Brandon under control of his emotions, there’s another where the veneer disappears. In one of many memorable scenes, Sissy performs “New York, New York.” The camera stays on a close-up of Mulligan’s face – forcing us to consider how Sissy’s interpretation changes the song – and once we’re moved, we see that Brandon is, too.

Nervy choices like this are exhilarating, making Shame a pleasure to watch, yet the explicit, sometimes disturbing moments are where McQueen’s true purpose lies. He earns the NC-17 rating with uncompromising sex and nudity that’s never pornographic.  Instead, his depictions are a window into Brandon’s fruitless quest for pleasure. Shortly after Brandon converses with a beautiful coworker (Nicole Beharie) over dinner, he whisks her away for some mid-day sex. The takes of their dinner conversation subsequent tryst are unbroken and hypnotic, highlighting their chemistry and Brandon’s intimacy deficiencies with careful patience. Other sex scenes are more existential, filmed like a combination of penetration and joyless calisthenics. McQueen’s soundtrack is critical for these different moods; ecstatic groans and mournful strings shape different encounters along with what happens on camera.

Fassbender and his partners are acting throughout the sex scenes, and their faces betray their inability to experience pleasure or love. McQueen’s style demands the same nervy courage from his cast, and they’re all captivating even when little is really happening. Fassbender, whose ubiquity shows no sign of dying, brings the same searing, raw energy that helped make Hunger such a success. A New York sex addict is a far cry from an Irish political prisoner, of course, yet both characters require a specific economy of speech and body language. Fassbender draws us in with Brandon’s superficial charm, and as Shame draws to a close, he shows us Brandon’s capacity for destructive, sorrowful rage. But for all the accolades he deserves, Mulligan matches him in her depiction of Brandon’s frayed sister. In a performance that’s sure to earn an Academy Award nomination, Mulligan’s finds new notes in a familiarly vulnerable character arc. 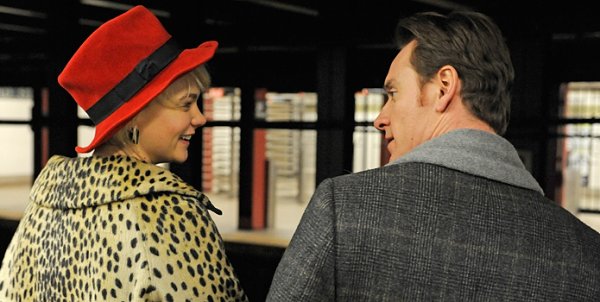 Like other top filmmakers before him, McQueen finds a unique way to depict New York City. His exteriors are sparingly heartless, bereft of warmth but open enough so they never feel like a prison. Brandon jogs toward Madison Square Garden in an unbroken shot, and Mcqueen’s steady hand captures the monotonous chasm that sometimes defines urban life.  And when Brandon hits bottom, going on a hell ride of vacuous sexual excess, McQueen and cinematographer Sean Bobbitt make New York seem like a brutally abstract nightmare. Like all its other elements, the use of exteriors is an example of how Shame reaches the upper stratosphere of cinema’s sensual power. This is mature movie-making at its most engrossing.