Exit through the Gift Shop is as subversive as the most audacious street art, if not more. Like Orson Welles’ pseudo-documentary F for Fake, Banksy’s directorial debut introduces thought-provoking ideas while calling its own credibility into question. It’s impossible to believe everything that transpires on screen, and the dubiousness is by design. Thanks to wry humor and an array of colorful personalities, audiences won’t get the feeling they’re being cheated. Instead, I suspect most will laugh their way through something that’s part character study, part anthropological survey, part meta-diatribe.  No matter what conclusions are taken away, EttGS has the potential to recalibrate perceptions on how art and celebrity interact.

It all begins with a look at Thierry Guetta, a Frenchman who videotaped everything around him. Serving as a markedly bemused narrator, Rhys Ifans tells us Thierry discovers his cousin is none other than Space Invader, a street artist whose alien mosaics can be found all over Paris. The camera regards Thierry and Space Invader as they struggle to paste a tile onto a particularly cumbersome wall. Soon Invader introduces Thierry to American street artists such as Shepard Fairey and DC’s very own Borf . Despite Thierry’s unfettered access to such talent, the anonymous Banksy is the Frenchman’s Moby Dick. After a long period of anonymity, Thierry gets access to the English artist, and even records the construction of his elaborate, risky installations.  Banksy and others are led to believe Thierry will use the tapes for a documentary, yet he’s too scatterbrained for such decision-making – when a final product does emerge, it’s downright unwatchable. So while Banksy edits another movie from the raw footage, Thierry begins his own street art project. I won’t say just how ambitious he gets, except to say I suspect many art collectors will feel like suckers by the time the movie is over. 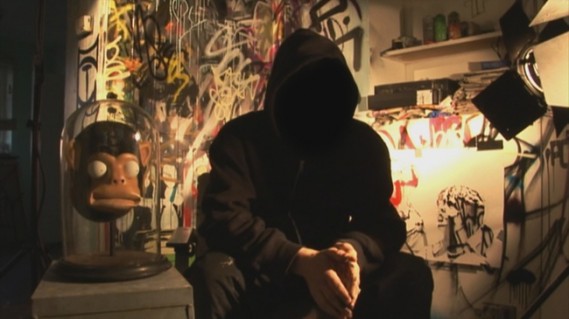 There is a traditional narrative, and those unfamiliar with street art will have no problem with the material, yet further scrutiny will produce a litany of difficult questions. It is unclear, for example, what it means to have Banksy listed as director. Sure, what we see is ostensibly Banksy’s cut of Thierry’s footage, yet it seems the final third is filmed with a different purpose entirely. Even Thierry’s accomplices are dumbfounded by his turn as an artist, so it’s easy to wonder whether it’s all a big joke. And if it’s a joke, who’s the one laughing? There are no answers, of course, so without too much theorizing, it’s easy to say the joker has done an excellent job of obfuscating what really happened. Whether one believes some or none of what they see, it’s clear someone was duped. Just how many were duped, audience included, depends upon on the level of trust the filmmakers receive.

It’s a good thing the movie is so damned funny, or these unanswered questions might be maddening. The humor mostly comes from interviews with Thierry and Banksy himself. Whereas the former appears daffy and aloof, the kind of guy who’d be pretentious if he could complete a sentence, Banksy comes off as droll and insightful. His comments frame the discussion in a sly way, and even though he appears in shadow with a digitally altered voice, he commands attention. For those who are put off by unanswerable questions (I wouldn’t blame you), EttGS at the very least documents the craft of street art. The cameraman is an accomplice as Fairey and others creatively deface public/private property. It’s no surprise Banksy’s brazen approach elicits the most laughs, particularly as he adds his work into the Tate Modern, or when he inserts political art into Disneyworld’s meticulously-crafted architecture.

While cumbersome, the phrase Exit through the Gift Shop expertly suggests art’s potential corruption. Unlike traditional painters and sculptors, the chosen medium of street artists is temporary and public. Their work decidedly egalitarian (i.e. no admittance required), at least until collectors monetize, privatize, and commercialize it. Without a public context,  the output of Thierry and others can seem cynical and hollow. Banksy thankfully sidesteps this concern with a project that both cherishes and criticizes street art’s hype. Through Thierry’s apparent success and the befuddlement of his peers, this hilarious movie reminds us those buying/selling overpriced reproductions may miss the point entirely.